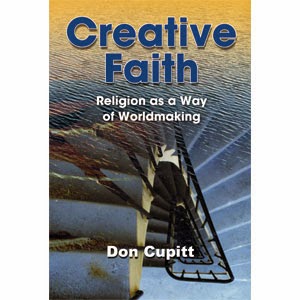 It is probably fair to say that Don Cupitt's work can be demanding. Then again, compared with other philosophers, you could also say he is one of the more approachable voices in the field. What makes Cupitt interesting is he is a 'radical theologian', Anglican priest and (depending on what you mean by the word) atheist.


'He rejects all ideas of gaining salvation by escaping from this world of ours. "All this is all there is", he says and he now sees true religion in terms of joy in life and an active attempt to add value to the human lifeworld. ‘Life’ is all that there is and all we have, and must be accepted with its limits as a package deal. We must avoid all attempts to deny or escape the limits of life — traditionally time, chance and death.'

Once you get familiarised with the vocabulary he uses, Cupitt can be hard to ignore. There's a short but fascinating audio interview with the man on the Philosophy Bites podcast. It's a pretty good introduction to his thought.

All of which is a just a preamble to noting that Cupitt has just (January 8) published a new title through Polebridge Press, Creative Faith. It won't earn many kudos from traditional theologians I guess, but hey, having read almost everything the man has in print, I'm keen enough to have already downloaded a copy on Kindle.
Posted by Gavin R at 20:43