Is there Intentional Fiction in the Bible? (Part 3) 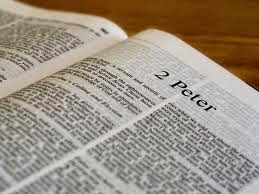 In part one we noted that fictional writings - such as Jonah - do indeed exist in the Hebrew Bible. In part 2 we looked at the evidence against 2 Peter being what it says it is, a letter penned by Peter of the Pearly Gates. That evidence is fairly unequivocal.

It's a mess. Made worse by those scholars and apologists who refuse to deal with the unpleasant facts. The editors of such widely promoted translations as the ESV for example.

So, what do we do with 2 Peter. I suppose there are more than three options, but let's assume that we regard the scriptures as authoritative in our heritage, and that we wish to deal honestly with them.

One option is to do a Luther. The reformer consigned Hebrews, James, Jude and Revelation to the fringes of the canon - a sort of appendix to the New Testament - on theological grounds (one can only wish Revelation, in particular, had stayed there). So the precedent definitely exists. The problem would be, I guess, once you started down this road - where would one stop? 2 Peter might be the most egregious example, but there are others not far behind (see Luther's list just for starters!)

A second option is to concede the problem but then boldly declare that it doesn't matter. "So there are fictitious accounts in the New Testament? So what? We just need a more sophisticated reading."

Sophisticated and sophistry come from the same root.

No, this will hardly convince the fundamentalists, nor most evangelicals who are, to speak plainly, not a particularly sophisticated lot when it comes to the Bible. Franklin Graham would have a hernia and the entire Southern Baptist Convention would go into meltdown - not to mention those two nice Jehovah's Witness ladies trying to give away literature on the main street in Pukekohe this morning. Liberal non-Catholics (we used to call them Protestants) might be comfortable with this stratagem - indeed, I know more than a few who are - but Christians of this persuasion are greying and dying out as mainline denominations enter an irrecoverable senescence. Hard to see bright-eyed, bushy-tailed missionaries heading off to convert the heathen when they have to admit that the source of their enthusiasm for the Water of Life is a such a muddied puddle.

So yes, I think it does matter when we have cuckoos in the nest like 2 Peter and no, there is unlikely to be any amount of clever sophistry that will provide a palliative.

Option three is to accept the New Testament for what it is, and yes it matters. The Bible is authoritative in the same limited sense that a denomination's confessional documents are (for example the horribly dated Westminster and Augsburg confessions). It marks the way along which we came and a shared history. It's a rough and weedy path and we've stumbled more than a few times, cursing the potholes and thorns. But it's only a means to an end, our eyes are on a more distant horizon. The Bible has a functional value. Pilgrims don't worship the ground they walk on en route (at least most don't), they strive to reach toward something that lies beyond. If you actually reach your pilgrim destination you're likely to be hugely disappointed. Forgive me dragging Luther into this again ("unhand me Schwein!") but think about his disillusionment upon finally reaching Rome ("I went with onions and returned with garlic.") This option shares many of the same problems as the second, but at least affirms that 'honesty is the best policy'.

And no, none of these options will satisfy most true believers. But there's no going back. 2 Peter is a junk epistle, worthless for proof texting, dubious for devotional purposes, our own little Book of Mormon within the Good Book. A junk epistle? Strong words maybe, but again, it was Luther who called James "an epistle of straw". Again, nice to have the precedent.

Are we dealing with intentional fiction? That's surely flattering the situation. Jonah, on the other hand, is a different genre of literature, and unlikely to have been written with duplicitous intent. It's hard to be as forgiving when we get to 2 Peter. We may be stuck with it, but we don't have to like it, lie about it or deny that a problem exists.
Posted by Gavin R at 15:30