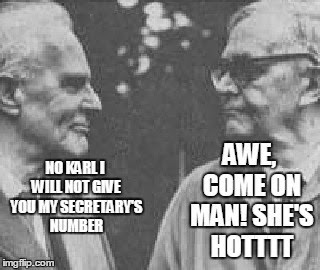 Not content therewith, Jim provides this image. Barth on the right, his fellow Reformed theologian and bete noire Emil Brunner on the left.

(Karl had a thing for secretaries? Jawohl.)

Now, just to make it abundantly clear for any humourless Presbyterians reading this, Jim is indulging in satire. Indeed his blog Zwingli Redivivus is a kind of Charlie Hebdo of biblioblogs.

At least I think it's satire; sometimes with Jim it's hard to tell...

Actually, I am more than a little sympathetic to Jim's views on Barth. The guy was a one-man dead end in Christian theology. Who else would write not one but two incredibly tedious and largely unreadable commentaries on the Book of Romans, neither of which qualified as an actual commentary?

John Bowden had the measure of the man in his 1971 SCM classic, Karl Barth. Sadly out of print, but you can pick up a second hand copy for next to nothing on Amazon. If you want to know about this genius in any detail, Bowden is the bloke to go to.

If you require less detail, Jim's one liner is probably quite sufficient.
Posted by Gavin R at 20:16