The December 31 issue of The Journal: News of the Churches of God is now available. The main feature is an article by John Warren relating the history of the now defunct Big Sandy campus of Ambassador College from 1964 through till 1981.

It seems the venerable Doc Meredith has been contemplating his mortality. The LCG Council of Elders, a toothless 'advisory' body serving under the Presiding Evangelist (Meredith of course), "passed an 'affirmation' stating who would be next in line to succeed Dr. Meredith in the event he was no longer able to preside over the church." Journal writer Edward Malone notes that the council "has no binding authority over the church or its administration."

Which is, of course, a recipe for disaster when Meredith kicks the bucket or wafts off into dementia. Richard Ames has the nod (hardly news, that's been in the public arena for ages, so why the fuss now? Is Meredith's competence questionable?). Could 2015 be the year that the spluttering torch is passed? If it is you can be pretty sure the operation will be fumbled - judging from past examples of "sticky transitions" - and the LCG will shatter.

Meanwhile Mac Overton has an interesting suggestion in the 'Letters' section.


"Why doesn't The Journal establish a Diotrephes award in honor of great examples of ministerial malpractice and allow church people to vote on it?" 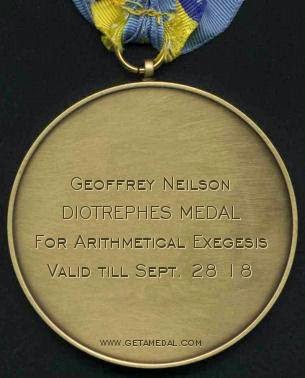 What a fantastic idea. No likely shortage of nominations! Somehow though I think editor  Dixon Cartwright will probably pass on that idea. What a shame.

And don't miss Geoffrey Neilson's letter, a long, poetic ode in which he suggests that the Feast of Trumpets on September 10 2018 might be blastoff time for "Jacob's Time of Trouble". How'd he work that out? you ask:

Wow. So there ya go, sheer genius, nicht wahr? Sure seems like proof positive to me, who could argue with such clever sums? I'd suggest Geoff get that first Diotrephes gong, but I don't think he meets Mac's ministerial criteria, having never "had hands laid". Maybe a special 'honorary' award in the interim, till voting procedures can be circulated. For creative exegesis? Wait... we can do that!
Posted by Gavin R at 15:53