Another Otagosh piece reprised from 2011. 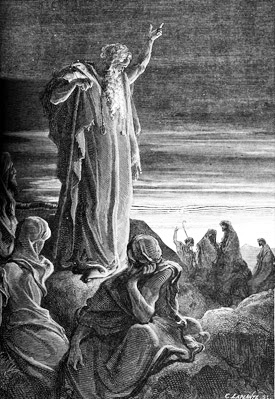 Those of us who have come out of a fundamentalist background usually associate the Hebrew prophets, Isaiah, Jeremiah, Micah and others, with prediction. In certain circles those predictions are not only infallible, but aimed at our own times which must be therefore, not unsurprisingly, the End Times. Prophecy, we are told, comes alive in today's world news.

This particular 'expert' then goes on to shoot himself in the foot by adding;

In more enlightened circles this is all passé. Of course the prophets weren't talking about today, they were 'forthtelling', not foretelling, and so on.

The trouble is, those circles of enlightenment are set on 40 watt narrow beam, and they've yet to pierce the darkness down the road at the neighbourhood store-front church. The failure of modern biblical studies is the almost complete lack of "trickle down" to the pews. 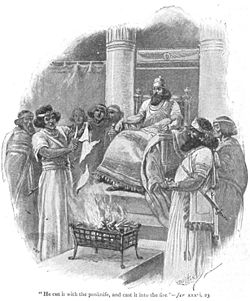 Of course there is poetry and theology in the Prophets. They wrote in a world where there was little separation between secular and sacred, no concept of democracy and no political parties. If you wanted to beat the king over the head for his questionable alliance with Egypt, for example, which is after all a very political thing to do, you picked up the club of prophecy, gathered your mantle about yourself, and whacked him lustily with a freshly minted word from the Lord. The prophets, more often than not, were the 'opposition party' in ancient Israel, which is why there were so unpopular with the royal regimes.

Naturally there is apocalyptic writing as well, which does present itself as peering through the mists of time (usually with the advantage of hindsight!) If someone wants to delve into Daniel or Revelation it'd be really helpful to get a grip on the basics of the apocalyptic genre first, before making a complete egg of oneself.