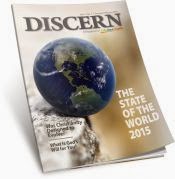 "Jim who?" you ask. Jim Franks. Jim is a leading punkawallah in the Church of God, a Worldwide Association.

Oh never mind. The important thing is that this church publishes a magazine called Discern, and in the latest issue Jim begins the first in a series of five proofs that the Bible is true. A sort of latter-day apologetic Pentateuch for the incurious fundamentalist.

I'm not exactly sure what Jim means by 'true', but I suspect he has a fairly rigid definition in mind; literal, propositional stuff. I'm not sure what he means by 'proof' either. I well remember a booklet called The Proof of the Bible where the author (some guy called Armstrong I believe) botched his prophecy argument completely and, according to one wag, actually ended up "disproving" the good book.

Jim's five areas of proof are, "archaeology, the Dead Sea Scrolls, secular history, fulfilled prophecy and the consistency of statements found within the Bible."

This could be fun. Jim launches out into archaeology. This is a brave move as, as far as I know, Jim isn't an archaeologist, even an amateur one. In fact I'd bet good money - if I was a betting type - that he's read absolutely nothing by anyone currently "in the field", if you'll pardon the pun. Indeed I suspect he's never so much as taken a university class in the subject either (apart maybe from an unaccredited and now closed college based in Pasadena?) But isn't it wonderful what you can find using Google these days!


"If archaeology can confirm the existence of major characters and verify major events as recorded in the Bible, then we have an objective proof of authenticity. There are archaeologists who reject the Bible and make the claim that many accounts recorded in Scripture never happened. These individuals are called minimalists and their position is that the biblical story must be read as fiction unless it can be confirmed by archaeology. Another group is referred to as maximalists and their position is just the opposite—the biblical story is more or less correct unless archaeologists prove that it is not."

I hope we all learned something there. Jim now grabs us by the hand and takes us on a jolly romp through Hezekiah's tunnel. Then...


"One of the greatest Jewish archaeologists of the 20th century was Nelson Glueck (1900-1971), who even appeared on the cover of Time magazine in 1963. He wrote the following about the authenticity of Scripture when compared to archaeology: “It may be stated categorically that no archaeological discovery has ever controverted a Biblical reference. Scores of archaeological findings have been made which confirm in clear outline or in exact detail historical statements in the Bible. And, by the same token, proper evaluation of biblical descriptions has often led to amazing discoveries” (Rivers in the Desert, 1960, p.31).

1960? The other not-so contemporary source Jim cites is from a 1981 US News and World Report article. Well, there ya go! Jim's really done his homework, huh? So I hope you're all now fully convinced of, of, of whatever Jim wants us to be convinced of.


"The story of Hezekiah’s tunnel and second wall, the Assyrian siege of Jerusalem and the death of King Sennacherib are only a few of the scores of biblical accounts that have been confirmed by archaeology. While there are archaeologists who reject the Bible as authentic, the record of archaeology, taken as a whole, supports the biblical text."