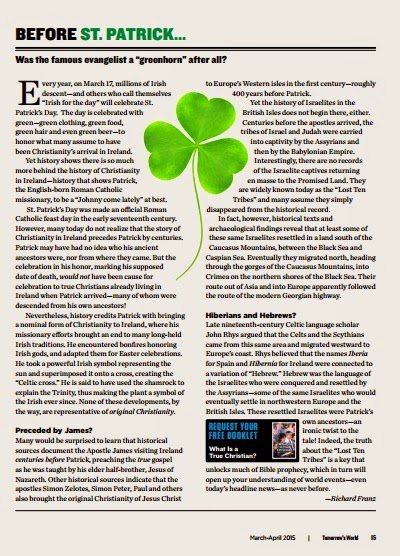 
Many would be surprised to learn that historical sources document the Apostle James visiting Ireland centuries before [St] Patrick, preaching the true gospel as he was taught by his elder half-brother, Jesus of Nazareth.

Yup, that's true... at least the bit about being surprised to learn.


Other historical sources indicate that the apostles Simon Zelotes, Simon Peter, Paul and others also brought the original Christianity of Jesus Christ to Europe's Western Isles [the reference is to Britain rather than Ireland here, but what's a little obfuscation when you're spinning a good yarn - G.R.] in the first century - roughly 400 years before Patrick.

I'm sure (to be sure, to be sure) that writer Richard Franz is the embodiment of scholarly acumen, but it's interesting that he provides no footnotes, references or bibliography for these alleged "historical sources". Nor does our informant provide details of his own expertise in the field of Irish history. Could it possibly be that he has none? (Tell us it ain't so Richard!)

Perhaps he's simply been away communing with the leprechauns and chasing pots of gold. Or perhaps he's just chugged one too many glasses of Guinness.

Of course there are ancient documents that allege such things, along with a host of kindred improbabilities. To call them "historical documents" is a tad misleading. These are legends, like tales of dragons and magic swords, made up from the whole cloth of imagination, mythology and wishful thinking. While Richard seems intent on swallowing them whole, I'd challenge him to cite one genuine historian of "Europe's Western Isles" in living memory who is dopey enough to do likewise.

There's an old Irish saying: "Pity him who makes an opinion a certainty." To be honest, I don't think Richard's little ramble through the shamrocks even counts as an opinion.
Posted by Gavin R at 21:38