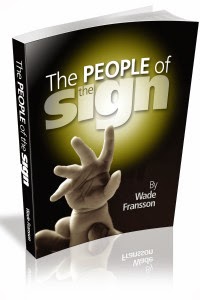 A preliminary mention of Wade Fransson's book People of the Sign. Fransson is one of the many ex-WCG ministers out there, still blinking in the sunlight after losing their income stream in the breakup of the church. His book is largely autobiographical, but where he now stands on matters of belief is a bit of a mystery, as he is being deliberately coy prior to the release of a second book that continues to chart his journey after walking away in the mid-90s. In fact, it may be that there's ultimately a trilogy here.

Unlikely as it seems, the first book has apparently been more successful than anticipated. Fransson has been doing the rounds on radio talk shows in the States, Bob Thiel style, for months (though judging from the podcast I heard, not exactly NPR quality.) However the fact that Henry Sturcke was willing to write a brief complimentery foreward has to be something of a recommendation.

No I haven't read it yet, but it's on the "to do" list, so it's likely I'll be pounding the keyboard on this again. All I can say at the moment is that the publicity is slick, Wade sounds glib in his interviews (didn't Spokesman Clubs do wonders!), and I'm hopeful, if not yet convinced, that he falls into the minority of ex-WCG ministers who have become genuine, decent, non-manipulative people.