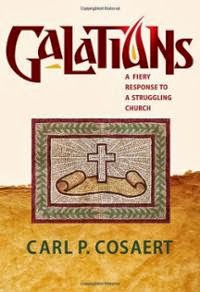 I recently ran across that most unusual of texts, a treatment of Galatians by an Adventist scholar. Galatians is, of course, the famously "law free" epistle in the New Testament and Adventists are, well, famously pro-law.

The author Carl Cosaert, is a man of some apparent erudition holding, as he does, "his doctoral degree in New Testament and Early Christianity." Moreover Dr. Cosaert is currently a professor of biblical studies at Walla Walla University. The book, Galatians: A Fiery Response to a Struggling Church, is published by Review and Herald, which makes it as close to an officially endorsed volume as you can get. Surely this has to be, I mused, more than the usual thin gruel of Adventist apologetic, right?

So, how does a good Seventh-day Adventist with academic 'cred' make sense of this troublesome epistle?

And the devil sat on my shoulder and whispered, "let's find out!"

So, here is the first in a short series of observations on Cosaert's book as the adventure (yeah, I know, I have a truly sad concept of what constitutes an adventure) proceeds.

To begin with the good doctor sets out "to spend a little time considering the man behind the letter." (p.8) The first thing that struck me, right there on the very first page, is that he credits all 13 of the letters attributed to Paul as genuine.


"... inspiring him to write at least 13 letters that today make up almost half of the books in the New Testament." (p.8)


I expect the irony of quoting the Deutero-Pauline book of Colossians as a proof text source on this subject wouldn't have occured to Dr. Cosaert, but interestingly, only a page later he writes of "each of the letters attributed to him" (emphasis added), so one suspects he wasn't sleeping through all of the 100-level New Testament papers he took. Of course fundamentalists continue to insist, despite all the evidence to the contrary, that Paul wrote the Pastoral letters, Colossians, Ephesians and 2 Thessalonians. By then again, they would, wouldn't they. Any hope that Dr. Cosaert might stand tall on this issue is dashed at the outset.

Another interesting quote about the faith of the earliest followers of Jesus.


"They claimed not only that Jesus was the promised Messiah and the true center of the Jewish faith, but also that He was God incarnate..." (p.13)


Now that's news. Paul in his pre-conversion fulminations was upset by a suitably proto-Nicean high Christology?

The other big issue for Cosaert is the nasty suggestion that the book of Acts might not be a reliable source for a reconstruction of Paul's life, and so he engages in a fairly weak-kneed defence.  His argumentation seems completely unclouded by the work of Knox (Chapters in a Life of Paul) or any of those who have followed him with meticulous analysis. At most he is willing to concede that putting together a chronology from Acts and the Pauline letters (all 13 of them!) is a tad difficult (p.11).

Much of the second chapter is given over to a homiletic word study around the terms "grace and peace" used in the Pauline introduction. I guess it helps pad out a few pages, but so far it's all pretty underwhelming. But who knows what wonders lie in chapter 3 and beyond... stay tuned.