This is the third in a series on obscure Bible translations. I've restricted the candidates to those I've been able to personally acquire and examine. 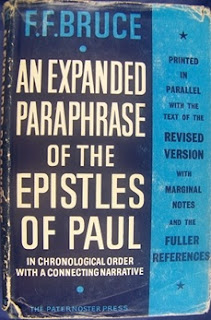 F F. Bruce. An Expanded Paraphrase of the Epistles of Paul. Paternoster Press, 1965.

Paul's letters constitute the deepest and perhaps murkiest part of the New Testament, and the various conflicting reconstructions of Paul's gospel are legion. F. F. Bruce was perhaps the most gifted evangelical scholar of his generation, and this was his attempt to clear things up for the modern reader. He began the project in 1955, paraphrasing Galatians for a youth Bible conference. He completed the task around 1961.

Bruce's paraphrase isn't anything like the more modern paraphrases most of us are now used to - think The Message, The Living Bible or (if you're an Adventist) The Clear Word. Bruce is much more measured in his approach. Call me old fashioned, but I quite like that.

Alongside his own expanded translation Bruce reproduces the text of the Revised Version. Not the RSV of the 1950s, but the RV of 1881, the British predecessor to the American Standard Version (ASV) of 1901. It's an interesting choice.


Of all English translations of the New Testament, the one which reproduces most accurately the nuances of Greek grammar and follows the idiom of the original as closely as possible without doing excessive violence to English literary usage - the translation which is therefore at the farthest remove from an extended paraphrase - is the Revised Version of 1881. (p.9)

I dare-say Bruce would shudder at the though of something like Eugene Peterson's The Message. I know I do!

Reading through the introduction I was pushed up the learning curve with a new term. What word would you use to describe someone who paraphrases? My guess would have been paraphraser, but Bruce's term of preference is paraphrast. It sounds as though it might be a ripe and seedy insult for someone of dubious affections, but according to Chambers Dictionary both are quite acceptable. Live and learn.

Given that this is an older work, and Bruce's popularity among conservative Christians (he was of the Plymouth Brethren persuasion) it's not surprising that he dates all of the epistles, including the Pastorals, to before 70 CE. Galatians is placed first at c.48, and the Pastorals between 62 - 65.

Likewise Bruce accepted the Pauline authorship of the Pastorals (1 & 2 Timothy, Titus) - sort of.


Into the critical question of their origin and composition we need not enter here, save to say that those who find it difficult to accept all three in their present form as letters written or dictated directly by Paul might consider the suggestion that they represent the posthumous recension of several pieces of Pauline correspondence and other fragments, together possibly with notes on his oral instruction on church order. (p.286-287)

A sample from Philippians 3:17-19 under the subhead "Warning against Libertines".


Follow my example, one and all, my brothers and sisters. Pay heed to those who conduct themselves according to the pattern which we set you. I say this because, as I have often told you before and tell you now with tears, there are many who conduct themselves otherwise. They are enemies of the cross of Christ; their end is perdition; their god is material satisfaction; they boast about things of which they ought rather to be ashamed; their minds are set on earthly things.

The last time this volume saw the light was a 1981 reprint, so it's another search through the second hand stacks (which is where I located my copy). The benefit of this book is the insight it gives into how a sincere and cautious scholar made sense of the prickly apostle's writings. I'm not sure he managed the trick, but then I'm not sure anyone else has either.

I intend to resume this series in a week or two with the following obscurities.