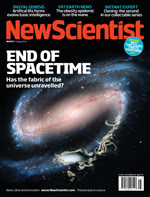 Frank Marsh, a Seventh-day Adventist, invented the word "baramin" in the 1940s. Frank mutilated two Hebrew words, bara (created) and min (kind) by bunging them together to describe Genesis "kinds." The term is used almost exclusively among the ranks of creationism apologists.


"Creationists believe different 'kinds' of organisms - 'baramins' - were created separately about 6000 years ago."

Enter Phil Senter. Phil is, according to New Scientist, the son of Southern Baptist missionaries. Not surprisingly, he grew up - as many of us did - accepting a variety of creationism, until he found out better at high school. These days Phil is a dinosaur biologist at Fayetteville State University in North Carolina, and describes himself as an atheist. Yet Phil is "engaging in friendly mischief" (his own words) with creationists by using the research techniques of "creation science" itself to demonstrate the reality of evolution.


"I wanted to determine whether morphological gaps separated Archaeopteryx - the earliest known bird - from the various non-avian coelurosaurs, the group of predatory dinosaurs ranging from tiny Microraptor to giant T. rex. I showed that within this group there is too much similarity to indicate separate baramins. Contrary to the previous creationist view that these animals were separately created, their own pet technique shows that these animals shared a common ancestor."


"The creationist camp's militant reputation comes mainly from vocal but ignorant internet posters. Creation scientists themselves tend to be well educated and polite... My goal is not to make enemies with cold-hearted debunking, but rather to set the record straight..."

The man deserves a medal! Phil may make his case convincingly, but it seems naive to imagine that colossally ignorant creationism apologists (the sort who write the books that appear in 'Christian' book stores) will allow it to challenge their prejudices. Still, it's nice to know that the creation ranters can be confronted on their own chosen grounds and still soundly trounced.

You can read the full New Scientist interview with Phil Senter here.
Posted by Gavin R at 20:50