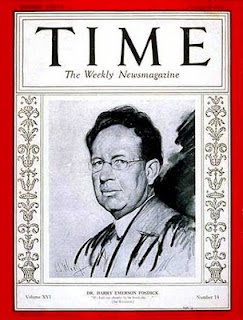 Across at First Things ("the most delusional pretentious important journal of religion and public life in America") you can find a list - fresh from the steamy depths of writer Joe Carter's subjective judgment - of the fifty most influential religious figures in American history. By 'American' the writer means US (rather than Canadian or Brazilian for example), a restricted usage that always puzzles a mere Antipodean like myself. Carter is also unwilling to include people like Carl Walther or Aimee Semple McPherson who were born outside the country, which seems more than a bit strange (by that criteria neither Samuel Marsden nor E. M. Blaiklock could be included among the most influential figures in New Zealand religious history.)

Of the fifty I recognized thirty-two, but could only make a semi-intelligent comment about twenty six, even if my life depended on it. Mary Baker Eddy makes the list but not Ellen G. White. Carl Henry is there but not Robert Funk. Gordon Hinckley gets the nod but Hal Lindsey is consigned to pre-rapture oblivion. Funk and Lindsey aren't hugely influential? Go figure.

And how on earth could anyone overlook Harry Emerson Fosdick?
Posted by Gavin R at 19:50