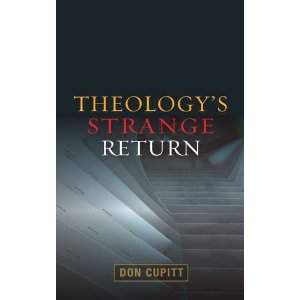 'Fundamentalist' religion, which is so counter-cultural, so hysterically anti-intellectual and of such poor quality... scarcely deserves the name of 'religion' at all.

We begin to see that historical ecclesiastical Christianity was from the first constituted by a great repression of something bigger and better that lies behind it.

Virtually the whole of the received 'life of Christ' is little better than pious midrash.

Only when we stop believing, and dismantle the old religious language, do we begin to see clearly just how clear and radical Jesus' ethical message was. So new, that it could be assimilated and presented only in mythologized, pietized, mystified form.

Don Cupitt, in the introduction to Theology's Strange Return, SCM, 2010
Posted by Gavin R at 20:21