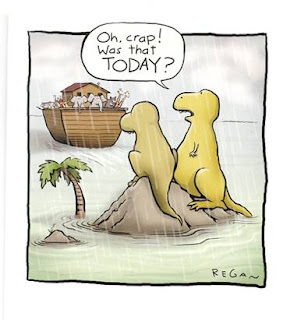 Richard Dawkins debunks the Noah's Ark tale in the video below (he cuts to the chase at around 4:15.) Gee, thanks Richard, but y'know what? I'd rather hear this from a prophetic voice within the Christian community. Why is it that among Christians who know better, so few (with honorable exceptions like Michael Dowd) are willing to stand up and call a myth a myth, an etiological tale an etiological tale, and slap around - for their own good - the morons who preach it literally?

The time has long passed when Christians should suffer fools gladly. Yet blowhard fundamentalists of the Ken Ham variety are largely left unchallenged by their more urbane brethren, as if it isn't proper form to notice their existence, let alone laugh out loud at their outrageous claims.

Dawkins effectively douses the Noachian nonsense with science, which is all well and good, but the people who embrace literalism aren't usually up to speed with that sort of thing (anyone can get a crash course by reading New Scientist for six months though!) Yet creationism isn't only appalling science, it's also appalling theology. Surely it makes sense to tackle these issues directly by addressing them unequivocally rather than politely coughing and hoping the whole embarrassing fiasco will go away.

So why don't they? Church leaders of the milquetoast persuasion seem to fear alienating a significant portion of their support base. Poor old Mrs Smith just wouldn't be able to handle it, so they choose carefully worded ambiguity, dancing around the the gaping maw of the fundamentalist pit on tiptoe, deliberately confounding metaphor with the real world. That's an abdication of responsibility and probably pretty shaky on ethical grounds as well. Has it worked? Looking at the ongoing decline in attendance, it seems fair to say that the strategy hasn't exactly been wildly successful. The approach which keeps Mrs Smith uneasily sedated has probably driven away both her children and grandchildren. The two-faced paternalism that in effect consciously misleads the "dumb sheep" lest they be offended is not only failing, it's also unworthy and dishonest.

While that situation exists, we should probably thank Dawkins for shouldering a task that most of us are unwilling to do ourselves.

(A nod in the direction of John Loftus' blog, where I found the clip featured.)
Posted by Gavin R at 16:08