Why go to church? 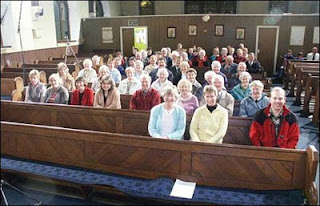 Why indeed! Chaeyoon Lim has the answer in a study published in the December issue of the American Sociological Review. It makes you happy! Professor Lim seems to have some valid data to back up the findings. (He obviously hasn't, however, surveyed some of the less than bliss-filled churches I've been involved with over the years.)

One thing does ring true though. The good folk who troop through the doors each week are usually there for one main reason, and it's got nothing to do with pure doctrine, felicitous sermons or tightly knotted theology (let alone fluffy, vacuous thoughts of 'thankfullness' and 'worship.') Those are more often than not pretexts or acceptable justifications. The real reason?


"Our study offers compelling evidence that it is the social aspects of religion rather than theology or spirituality that leads to life satisfaction... the evidence substantiates that it is not really going to church and listening to sermons or praying that makes people happier, but making church-based friends and building intimate social networks there.
"The report said the findings were applicable to the three main Christian traditions and found 'similar patterns among Jews and Mormons, even with a much smaller sample size."
That might be true down at St. Joseph's Catholic or St Aidan's Anglican, but does this apply to sectarian communities too? They seem to me to score on the " belongingness" continuum, giving members a sense of personal significance ("Why were you born?") rather than social connectedness. After all, to join a marginal community, or high-demand group, you generally have to sacrifice friends and family in order to embrace "fictive kin." Take it from me, in certain sects life isn't a beach, it's a piranha tank!

And why, with all this supposed churchly happiness, are people leaving in droves. It would be interesting to see if Lim's study could be repeated outside the United States where Christian decline is more acute. And is it possible to get the same benefits by joining a weekly gardening circle or hiking club?

Then again, why bother asking. The message seems to be "don't worry, be happy." Who can argue with that?