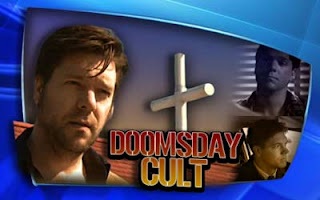 It apparently took a day to film, but the edited item on A Current Affair lasted just five minutes.  Ben Mitchell - briefly- had the chance to tell the story of what it means to be raised in a sect like the Worldwide Church of God.  Of particular note were the consequences of Herbert Armstrong's hypocritical doctrine on healing, which claimed the lives of several members of Ben's family, an aunt and two infant nephews.  Consequences too for Mitchell who, post-WCG, went "off the rails" with drugs in the midst of a promising career in television.

The piece was salted with clips from Called to be Free, the PR DVD that advertises the church's "transformation".  Herb shook his jowls on screen once again, and the smug mug of Mike Feazell briefly graced prime-time screens across Australia.

There are those who say "get over it!"  In my experience, those who say that are the ones who haven't followed their own advice, or they wouldn't be, in effect, protecting the church, or failing to share their experience so others could avoid the pitfalls.  My only criticism of the ACA item was that it was so short, and didn't provide much if any depth.  But if the publicity means more people read Mitchell's book ("based on a true story") then it won't have been in vain.