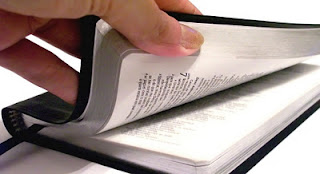 Long after breaking free from a particular high demand form of fundamentalism, many people still carry around the associated baggage of assumptions. One of the most toxic sets is about the Bible.

Some people are led straight back into another brand of straight-jacketed faith. Dr Pepper is simply substituted for Pepsi. That's the obvious danger.

But what about passionately rejecting the Bible, as if the fundamentalist position was the only way the Bible could be read meaningfully? When that particular ship goes down, so does any residual regard for the book it abused.

No, the Bible isn't an instruction manual, infallible, inerrant, or even uniformly ethical. It certainly isn't possible to read it literally as history, whether in Exodus or Acts. Yes, it's dangerous in the hands of idiots and televangelists. But, quite apart from those very real considerations, at minimum it's an indispensable link to our past, our culture and language. So little survives from the ancient world's literature, the links preserved in the Bible are precious.

But only precious if the fallibility and limitations of the texts are recognised.  And how dopey is it to ignore the various conventions of genre that make up the Bible? We don't have much trouble acknowledging this with Homer or Herodotus, yet - and can't you just feel the vapours rising - Jonah, Genesis and Revelation can't possibly be treated with the same detachment, can they?

The problem is that nobody anchors their ethics on Homer, or seeks counsel from the Gilgamesh Epic before making a significant life-changing decision. The Bible is however a fund of stories which bears that burden, and read critically and honestly, can effectively confront us with a critique on life and values and perhaps even an encounter with the Ultimate. For Christians it's important that these are shared stories, part of a common fund that all can draw on, unlike something on the New York Times bestseller list or the latest episode of Downton Abbey. Sometimes the text rings true from the outset; think of many of the parables. At other times any sane reader couldn't help but recoil in horror as they enter into the text - texts, for example, that glorify Bronze Age tribalism and xenophobia, wrapped in the obscene language of divine authorisation. If you're going to read the Bible profitably, you've got to know the difference. Our response cannot and must not default to a prayerful, passive acceptance, but sometimes a screamed 'No!'

Where to begin?  For those who are 'over' the Bible, perhaps their ship has already well and truly left port. If the path of personal liberation requires that, fair enough and godspeed. But for those still attached, maybe a first step is to retire their familiar fundamentalist Bible, the "faith enhancing" translation with the slavish marginalia. Substituting a HarperCollins Study Bible or New Oxford Annotated Bible wouldn't be bad places to begin. Anyone with a Life Application Study Bible is swimming in swill, and something like the ESV Study Bible is no better (and arguably worse). The King James Version can be appreciated for its literary aesthetics, but not much else. Obsequious notes and dishonest translation choices (e.g. virgin for young woman in Isaiah 7:14) are a sure indication that the reader is still soaking their head in those fundamentalist assumptions.
Posted by Gavin R at 22:57