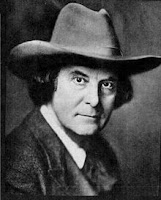 Elbert Hubbard was, in his time, a man of letters in the mold of Mark Twain. Unlike Samuel Clements however, Hubbard was a man of wealth, and there are those who believe his literary fame, forged at the turn of the last century, was more the result of well-oiled self promotion and ego than any substantial talent.

Be that as it may, Hubbard - an uncle by adoption to the loathsome L. Ron Hubbard, founder of Scientology - remains hugely quotable, equally for his common-sense insights and aphorisms as his outrageous opinions. Here's the first in a series of quotes from the sage.


To have a beautiful old age, you must live a beautiful youth, for we ourselves are posterity, and every man is his own ancestor. I am to-day what I am because I was yesterday what I was.

Which echoes the old adage that the child is father to the man (or, to bring it up with the times, the child is parent to the adult.) The quote, which I think is rather nice, comes from his brief but horrendously un-PC essay The Disagreeable Girl, published in Love, Life & Work (1906).
Posted by Gavin R at 12:15