Keeping the little lady in line 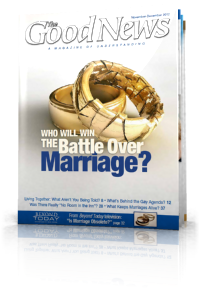 "Are the ancient biblical instructions for marriage that call for a wife to submit to her husband still valid? How can a wife willingly submit to a less-than-perfect husband?"

Yes, oh most definitely they are, at least according to the November/December issue of the Good News magazine.  No matter that we're all supposedly living in the twenty-first century, not the first.

I give the GN some credit in that the author of the article (A Woman's Key to a Happy Marriage: Trusting God in Submission) is actually a woman.  In the antecedent church body years, even decades, could go by without a woman's by-line appearing in official publications.  But I digress.

Linda LaBissoniere creates a fictive woman, 'Marissa', to illustrate her case (which I assume was fully vetted by her lord and husband before arriving on Scott Ashley's desk).  Poor dear confused Marissa had read Ephesians 5:22-24, and had a problem with it.

"Marissa felt that God surely would not consider this passage valid today. After all, Paul lived in a male-dominated culture, where women were often dependent on their fathers or husbands for survival. Today, women are able to support themselves and in most cases are as educated or even more educated than their husbands."

"Perhaps you too have questioned whether biblical instructions regarding marriage are still valid today. Specifically, are the words of the apostle Paul out of date, or can they be used as a foundation for Christian marriages?"

Darn right about that!

"We must first understand that the biblical view of marital roles derives not from ancient patriarchal culture but from the order established by God at the creation of man and woman (Genesis 2:21-24

). When couples submit to God's pattern for marriage, the result is peace and happiness.  Sadly, our Western society teaches women to reject the biblical view of the husband's headship and the wife's submission. Ignoring this role distinction within marriages is a major cause of many breakups today."

Next Linda backtracks to paper over the awfulness of it all.  Submission isn't all that bad:  "in our society "submission" sounds like a flawed relationship of inferiors to superiors."  Just "sounds like"?

"...  there are various times when a husband should wisely defer to the wishes of his wife (compare the principle of all Christians submitting to one another in Ephesians 5:21
). This would especially be true in areas where the wife is more knowledgeable. Both partners should always discuss major decisions and goals. However, if their opinions vary, God has instructed that the husband should make the final decision, and all family members should honor and respect that (Colossians 3:18
)."

Next there's the gratuitous use of a spot of Hebrew to bolster a weak-kneed argument - specifically ezer (rhymes with geezer?) - before Linda gets back into stride.

"Scripture is clear that wives are to be submissive to their husbands and obey them unless obedience involves breaking God's laws and biblical principles."

So if the old geezer wants to stop 'Marissa' tithing, or wants her to stand lookout while he rams the Ford pickup into the local ATM, then she might discover a little spine, but otherwise... 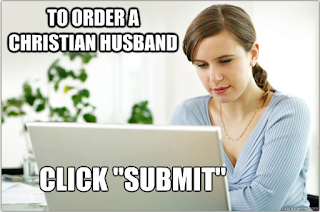 "The key to understanding submission is to realize that ultimately a wife is serving God, not man... every wife should strive to submit to her husband's leadership with the same attitude that Christ displayed toward His Father. Even though she is equal to her husband in the eyes of God, she should not question his God-ordained right to lead, just as Jesus who shared divinity with God the Father did not question His authority"

"By following her husband's lead, a wife is trusting in God's protection and deliverance. This parallels Christ's submission to God, even to His death (Luke 22:42
). If her husband truly wrongs her by his decisions, he will be judged by God. However, she will be blessed in the long run if she trusts God and follows the biblical admonition to submit to her husband."

Finally it's time to catch up with our no-longer conflicted exemplar, Marissa.  Marissa has seen the light and knuckled down, submitting to husband Tony in the approved manner.  No surprise to learn that it's all coming up roses.

"Marissa and Tony were overwhelmed at the blessings that came from following God's marital instructions. Marissa found the love and security she so deeply desired, and Tony finally felt the fulfillment of his longing to have a supportive companion to help and strengthen him. They also experienced much joy knowing that their marriage more closely reflected the relationship between Christ and the Church."

There is so much wrong with this article that it's difficult to know where to begin.  If I had to make one response it'd relate to Mrs. LaBissoniere's statement that "the biblical view of marital roles derives not from ancient patriarchal culture but from the order established by God at the creation of man and woman..."

The Bible was written in the very real world that predated modern times.  That's why the command was issued not to covet "your neighbour's wife" only, but other choice items of property: neither his "ox, nor his ass". Yep, in those far off days women were regarded as property.  Biblical marriage also included polygamous arrangements and, if you were a male and had the wherewithal, concubines.

Where do we get this idea that the 1950s nuclear family is the ideal that has existed since creation?  Marriage has obviously changed.  It continues to change, and for the large part it's been change for the better.

But what about those New Testament texts?  Same general point.  Roman society, despite what Linda may have read in old church literature, was extremely pro-patriarchal in the traditional "husband wears the toga" sense.  Likewise the New Testament fails to confront the institution of slavery, shamefully telling those unfortunate souls who were slaves to... you guessed it... submit!

The fruit from this kind of article is unlikely to be improved marriage relationships.