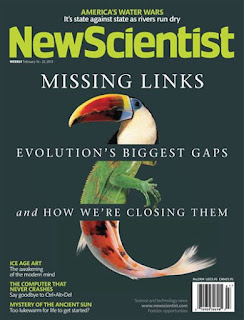 As a mere strip of a lad, I remember asking our family pastor, Byron Klein of Hamilton's St Matthew Lutheran, what to make of this evolution thing.  Byron, who was a thoroughly decent and sincere bloke, paused for a moment then responded: "well, I take some comfort from knowing that so far science hasn't been able to track down any 'missing link'."

Or words to that effect.

It was perhaps an acceptable evasion back then, especially to an irritating know-nothing kid.  But today it'd be a bit threadbare. The February 16 issue of New Scientist has a cover feature entitled Missing Links: Evolution's Biggest Gaps and How We're Closing Them.

Not that the staff writers at The Good News are likely to pay much attention.  But intelligent lay people - both in the worlds of science and religion - definitely should.  The world is far too interesting a place to wallow, eyes tightly shut, in the slime pits of creationism.
Posted by Gavin R at 10:00