150 Years of The Bible Advocate 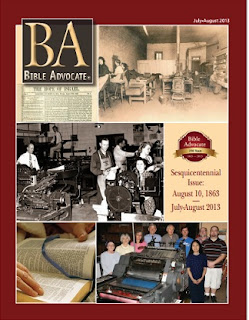 2013 is an important date in the history of the Sabbath-keeping Church of God sects. It was 150 years ago that a publication now known as The Bible Advocate was launched. Many imitators have arisen, each a flagship for the particular offshoot body it represents; Tomorrow's World, The Good News, The Philadelphia Trumpet and, most famously, The Plain Truth. Some are slicker, and many have surpassed the BA in circulation numbers. But one thing can't be denied: the BA has endured. It's still going strong, and shows no signs of disappearing anytime soon.

The latest issue marks the journey. Yes, it's basically a fundamentalist publication. But the BA still has a charm of its own. Published by the mother body, the Church of God (Seventh Day), it represents a more balanced, relaxed version of the Adventist gospel than either the Seventh-day Adventist Church - to which it is closely related - or it's own prolific and contentious (some might say demented) offspring.

Among the features in this issue is an article by former editor Jerry Griffin. That's pretty remarkable in itself as Griffin, who also once headed up the church's ministerial training school, left COG7 in the early 1990s over that thorny issue of legalism. Imagine the bunch of ratbags who currently churn out what's left of The Plain Truth - or perhaps Christian Odyssey - inviting former PT editor Brian Knowles to write a guest column. Not exactly likely is it. And yes, Griffin's article is well worth reading.

But COG7 culture is a bit different, and that's refreshing. This anniversary issue of the BA can be downloaded in full as a PDF. I hope the lads out in Glendora do just that. They might learn something in the process.
Posted by Gavin R at 21:51