The problem with The Good News magazine 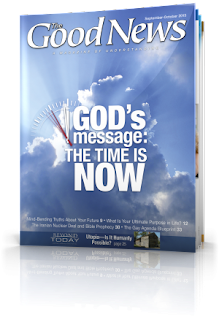 Of all the major Armstrong splinters, the United Church of God is probably the most balanced. But unfortunately that's not saying a lot, as the current issue of The Good News clearly demonstrates.

In the first Tom Robinson rants about what a bad thing the Iranian accord is:


The appeasement of evil has sunk to new levels with the stunning nuclear agreement with Iran. Be warned: Terrible times lie ahead.


As of this writing, the U.S. Congress still has the opportunity to stop this agreement. But that may prove difficult.

These developments touch on Bible prophecy in a number of ways.

Robinson quotes conservative commentators and politicians, including Ted Cruz, to back his view and then - surprise! - leaps off into a discussion of prophecy larded with British Israel nonsense.


Then, horrifyingly, God foretells something like nuclear war or worse—with cities in America and other British-descended nations ravaged and destroyed. As Ezekiel 6:6 states, “In all your dwelling places the cities shall be laid waste.”

What's that got to do with Iran?


Iran could also play a part in the rise of the end-time “king of the South” in the prophecy of Daniel 11. This chapter principally concerns an age-old conflict between powers to the north and south of the Holy Land...

Could? There's the key world that indicates he's daydreaming, and nothing more.

Which leads to this:


There is really no way to successfully negotiate with such people. Whatever they agree to is merely to buy time to prepare for the needed world conflagration.

Where's the balance here? This is a petulant piece by a man with - please correct me if I'm wrong - zero expertise in this subject, and who has one suspects been spending far too much time on the sofa with Fox News and WND.

What's the allure of this kind of rant? Why won't the GN provide some sort of sane overview of the situation - which is what it would claim to be doing but clearly is not. Why are they incapable of even hinting at an optimistic assessment of the Iran deal... even if only to provide some much needed balance.

It just doesn't fit the narrative.

The narrative, based on a profound ignorance of what the Bible is (and isn't) has the world going into an irrecoverable tail spin. Things might look bad right now but they're going to get worse. And there's nothing you can do about it but belly-ache and moan. This constitutes "warning the world", which (don't laugh!) constitutes preaching the gospel. You couldn't get a clearer example of this kind of warped narrative than these words from Darris McNeely on page 4 of the same issue.


Europe is in crisis. Russia steadily extends its influence and power as it modernizes its military forces. China is likewise expanding its power and pushing its influence and control over regions once protected by the United States.

America is being pushed back in its historic role as a global military, economic and political superpower—while within American culture we see the traditional roles and rules of marriage, family and sexual identity going through radical redefinition.

What does it all mean? Where is God in all this? And what is He doing in today’s world?

The Good News is incapable of balanced commentary because it is in thrall to a myopic apocalyptic ideology. The UCG has a constituency that has largely bought into this anti-life narrative built on suspicion of all human progress and optimism. This is its heritage from Armstrongism, and the bad news is that other sects in that tradition are even worse. It explains why these groups can't resist the temptation to stick their thumbs into the most extreme of conservative political stews.

The UCG's constituency no doubt laps this up. The GN isn't interested in stretching and challenging its readership. That would upset the tithe-cart. But good journalism, including church journalism, does just that. That's how people grow.

The real "good news" is that the world is changing out from under groups like UCG. That they are still promoting a 19th century variety of British Israelism in the second decade of the twenty-first century is a damning indication that they are set on going the way of the dinosaurs, and no amount of repackaging of the old product will change that.