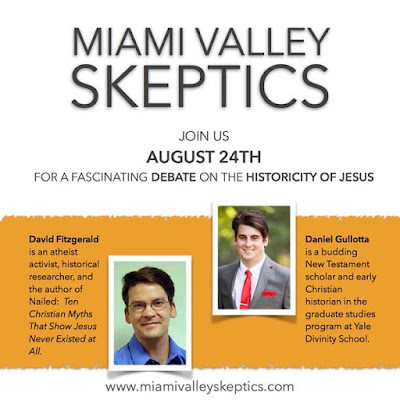 A couple of soon-coming events on-line that I've marked on my calendar.

A "Disdate" (something between a discussion and a debate that may include a certain amount of politely restrained dissing) on Jesus Mythicism between David Fitzgerald (taking the mythicist corner) and Daniel Gullotta (taking the consensus position). Not the two debaters I'd most like to see - what a missed opportunity it was when the much awaited event featuring Ehrman and Price fell flat! - but it could still be interesting. I've never been particularly impressed by Fitzgerald, and Gullotta, while wonderfully confident, is not exactly a voice of experience. Gullotta writes on his blog:


Fitzgerald and I [were] invited to be involved in a recorded debate hosted by the Miami Valley Skeptics, where we would discuss the historicity of Jesus and why the two of us have come to us radically different readings of the evidence. The show is designed to be a question and answer style debate... There will be questions throw at David and I, in which we will be given space to answer, but also time given so we can respond and offer criticism or insight. The show will be published on the 24th of August.

The podcast, when it's available, will be posted at  miamivalleyskeptics.com

John Shuck is interviewing Don Cupitt on an upcoming Religion for Life podcast (available sometime Sunday US time). Evangelicals and fence-sitters in mainline churches tend to loathe Cupitt. Moderate Baptists have been known to tear his books apart while foaming at the mouth - and that after only a few pages. I must admit that it took me a while to get used to the irritating Oxbridge accent and the writing style, but now I'm something of a fan. Julian Baggini in his Atheism: A Very Short Introduction (Oxford, 2003) comments:


Cupitt finds himself under fire from Christians and atheists, who both think he is actually an atheist after all and should just admit it, but I think his attempt to save something distinctive from the wreckage of religious belief is admirable and has lessons for believers and atheists alike.