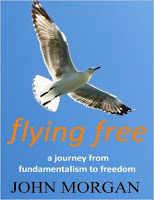 John Morgan is best known for his investigative work on the death of Princess Diana. His most recent book, How They Murdered Princess Diana, published last year, summarised his previous research in detail. Not perhaps so well known is an earlier book, Flying Free, which chronicled his years of involvement in the Worldwide Church of God. I reviewed Flying Free when it was first released and found it very helpful, not least because, although I didn't know John personally, he was a contemporary in the Auckland WCG during my time there. His brother Rex is, as far as I know, still the contact man for what is now Grace Communion International in New Zealand.

This week John, who has been battling a debilitating illness for many years, released a statement about his health and his work.

Australian investigative writer John Morgan, who has written ten forensic books on the 1997 death of Princess Diana, has revealed he only has months to live... [He] has lived with the severe neurological illness Multiple System Atrophy, for the past 12 years.

In a statement released today the NZ-born author said:

“Recently symptoms of my illness have worsened considerably and I am now not expecting to live beyond the next few months... I wish to state categorically that I stand 100% by the results of my forensic investigation into the deaths of Diana and her lover, Dodi Fayed... after having named several people involved in the assassination and many Establishment-connected witnesses who have lied in their evidence, not one person has sought to sue me or clear their name.

John's passion and commitment as an investigative writer have been uncompromising and relentless. I'm sure many readers will join with me in saying that our thoughts are with John and his family at this time. Information on his work can be found at princessdianadeaththeevidence.weebly.com.