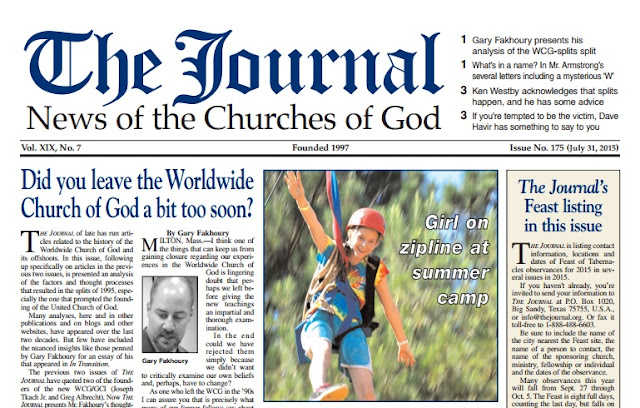 The latest Journal is out dated July 31, and it's a scorcher. Some really good features, which will be highlighted in the second of two postings here.

But to deal with the worst first, so we can all move on...

In the main news section:

Brian Harris with The new pope: Is he the one? Quote: "Prophecies relate to the arrival of an influential pope who, in an old quest, will give a new European leader his support, uniting the Catholic world against the mainly Protestant nations of the United States and Britain, Canada, Australia, New Zealand and the nations of Western and northwestern Europe, which are the descendant nations of ancient Israel migrated from their original homeland."

Sad, not to mention stupid.

Ray Daly with The wonderful earth tomorrow: What will it be like? Quote: "How about the several islands off of the Straits of Gibraltar? Think land masses. And, while thinking on these things, think Atlantis.

"These land masses in some circles, are called Pan. Atlantis was part of Pan. But Pan existed only until the earthquakes during the time of the reign of King Uzziah (840-790 B.C.).

"It was at that time that Pan sank beneath the seas and the mountain ranges rose to their present size. It was such a calamity that the earth tilted 10 degrees on its axis."

Ray should have stuck to J. M. Barrie's Peter Pan.

In the Connections ad section:

The Obedient Church of God is back displaying its not inconsiderable ignorance and creative grammar. Quote: "I CHALLENGE all offshoot WCG sinisters 1 Kings 18:19 and dare you offshoot WCG sinisters to SPEAK UP and defend your lies of WHY you do not obey God’s 4th Commandment in 1/2 the World! So STOP HIDING from this SIN: While YOU “quietly” MOVE God’s SABBATH to FRIDAY using man’s phony 1883 IDL (International Date Line), just like the Poop moves God’s Sabbath to SUNDAY."

Art Mokarow announces "(TheBiblicalReporter.com) is a new website to take vital world news and compare it to Biblical Prophecy. It will compare today’s news with what was documented thousands of years ago in the Bible."

Oh how very original. C'mon Art, you've got to be well past retirement age. Time to sit back with a nice cup of tea and read some Dostoyevsky, learn some basic Dutch, or watch the complete seven seasons of Star Trek: Deep Space 9. Frankly dude, with this prophecy stuff you're just embarrassing yourself. One William Dankenbring is more than enough.

Now I know this sounds a tad unappreciative. But having isolated the more egregious guff in a strong Bullgeschichte containment field, next time we can go back and discover some material that is much more stimulating. If you can't wait (and why should you?) the PDF is available here.
Posted by Gavin R at 13:10