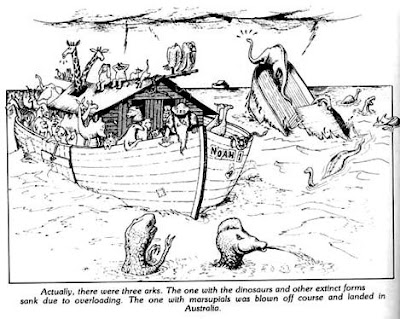 If the stuffy old Roman Catholic church can do it, how come the trendier, more rabid American fundamentalist sects don't catch on.


The theories of evolution and the Big Bang are real and God is not “a magician with a magic wand”, Pope Francis has declared.

Speaking at the Pontifical Academy of Sciences, the Pope made comments which experts said put an end to the “pseudo theories” of creationism and intelligent design that some argue were encouraged by his predecessor, Benedict XVI.

Yup, the winds of change are blowing through Catholicism, hallelujah.

But those wacky Southern Baptists, Missouri Lutherans and assorted "bah-bull" sects just zip their fleece-lined wind-breakers all the way to the neck and pretend it's just a bit of a breeze that will pass quickly.


“When we read about Creation in Genesis, we run the risk of imagining God was a magician, with a magic wand able to do everything. But that is not so,” Francis said.


Giovanni Bignami, a professor and president of Italy’s National Institute for Astrophysics, told the Italian news agency Adnkronos: “The pope’s statement is significant. We are the direct descendents from the Big Bang that created the universe. Evolution came from creation.”

Earth calling Vic Kubik and the gang at UCG; listen up dudes.

(Quoted passages from The Independent.)
Posted by Gavin R at 15:25