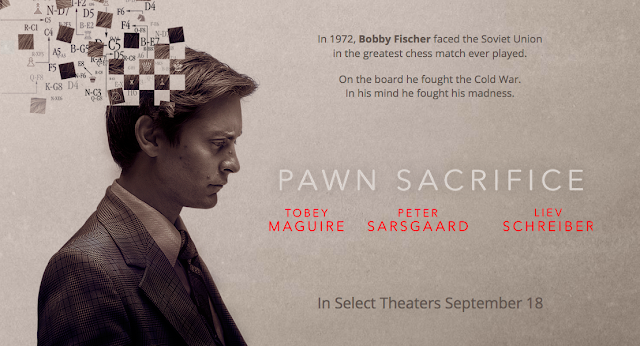 Bobby Fischer may have been the greatest chess champion of all time. Certainly he was in a category of his own among American players. He was also a recruit to the teachings of Herbert Armstrong and the Worldwide Church of God.

His period of attachment wasn't to last, but there was little doubt that - at least for a while - he was a prize trophy for the one true church.

Tobey Maguire - a past embodiment of Spiderman - plays the chess grandmaster in an upcoming movie Pawn Sacrifice. The question many of us will be wondering about is if and how WCG's role will be portrayed. Surely they've gotta slip in at least a reference, huh? These comments from the LA Times.


Documentary footage is interspersed with the chess-playing dialogue-free scenes as [director Ed] Zwick aimed to shift between Fischer's private hell and the media circus he lived. The effect is "a fragmented portrait that wasn't dissimilar to what his life might have been," said Zwick.

Fischer joined the apocalyptic cult Worldwide Church of God for a time, then ended up in Pasadena, consumed by paranoia and living under a pseudonym. In 1992, he replayed Spassky in war-torn Yugoslavia. But the match violated U.N. sanctions and the U.S. issued an arrest warrant for Fischer. The chess champ lived the rest of his life in exile, occasionally coming out of seclusion to issue venomous attacks, particularly aimed at Jews.

And while we're at it, check out this article in the San Francisco Chronicle about pianist John Khouri, a Lebanese New Zealander living in the US who made his mark in the world of classical music. I'd no idea that he too spent time in the Herbal Empire.


Khouri went off to Switzerland as a teenager to study piano, but his music career was sidetracked when he joined the Worldwide Church of God, an international evangelical denomination. For four years, he stopped practicing at all as he was sent on ministerial missions to Canada, England and Hawaii.