Pseudepigrapha - What did Billy write? 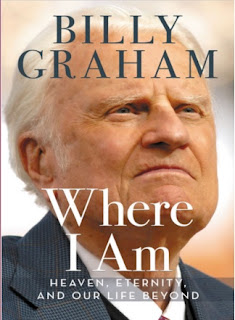 Billy Graham has a new book out. Or does he?

Things have been pretty tragic at the Billy Graham Evangelistic Association since ne'er do well son Franklin saw the light (hallelujah!) and stepped into Daddy's shoes. As the father's health has slipped, so the son has gained ascendancy with a coarser, more spiteful version of the family ministry.

Billy's latest release is titled Where I Am: Heaven, Eternity, and the Life Beyond. But Elesha Coffman suggests that Billy didn't write it, wasn't capable of writing it, and that the message it conveys is inconsistent with his actual views. Her article - which makes a strong case for someone other than Graham doing the deed - is online at Religion Dispatches.

There's a word for false attribution of this kind: pseudepigraphy, as in pseudonym.

My one and only attempt at reading a Billy Graham book was his 1965 hell-fire opus World Aflame. I can only plead that I was just a kid at the time and it was a family member who brought the thing into the house. The final chapter was entitled "The World of Tomorrow", perhaps a sideswipe at a certain broadcast from a competing ministry - at least I like to imagine so. World Aflame is now accessible online in its entirety, if you've got an oversupply of brain cells to burn.

Clearly there's still money in the Billy Graham moniker even after all these years. And it must be convenient to have the final book bearing his name align with the narrower opinions of his anointed heir. But then, if Billy didn't actually write the thing, surely there's a wee problem with "bringing in the sheaves" under that pretext.

Time perhaps for Franklin to come clean. But it might be best not to hold your breath.