Inclusive language, is it of the devil? The subject riles many a NASB devotee or KJV recidivist, what with all this pandering to the ladies. More surprising is the disdain inclusive language bibles generate among the good and the great, including such luminaries as Bob Price and - the most widely read biblioblogger in the known multiverse - Jim West.

Here's Jim in a recent entry: the silly debate about gender and language is the biggest waste of time since Red Riding Hood argued with the wolf. If a translation sets out to adjust the text simply for modern tastes and sensibilities, it isn’t worth a pot. If it says ‘he’ translate ‘he’ and let the exegetes worry about whether or not it’s generic for ‘humankind’ or gender specific. (source)

Jim West's blog deservedly outranks everyone else because he writes like a real person, puts on few airs and graces (except for an insufferable tendency to link to foreign language sources without warning), suffers from no false modesty, and his writing style has an "edginess" to it that slaps you around sufficiently to grab your attention. But he's dead wrong on this one.

If you attend a liturgical church, one which follows the lectionary cycle, you know that the main exposure congregants get to "the Word" is in the hearing thereof. Forget all the puff and faddle about devotional reading in the home: 90 plus percent of bible exposure is on Sunday morning via the readings.

This needn't be a particularly bad thing. This is the way it's always been, reaching back to the synagogue and beyond. In "bible times" books - and especially scriptures - were written to be shared by reading aloud. The scrolls, codices and whatnot were way beyond the means of your average person in the pews, who couldn't read them even if they had a shekel to spare. 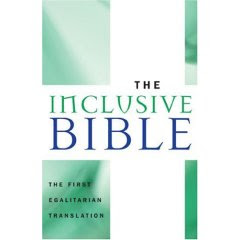 So, what's this got to do with Red Riding Hood? Just this. Gender specific language in the context of liturgical use does alienate more than half those sitting in the pews. Week after week women get the message: they're peripheral. Liturgical use is different from that of tendentious scholarly exegetes; it is primarily pastoral. Which is why the NRSV is the best choice for most lectionary readings (don't get me started on the ESV!)

In fact, I'd recommend any serious bible reader get a hold of something called The Inclusive Bible,

a radical Catholic translation that claims with some justification to be "the first egalitarian translation." If you want strict correspondence to the original languages, then it won't be your choice. But if you have a pastoral concern to speak (or be spoken to) in a way that is congruent with life in the twenty-first century, you couldn't do better. And hey, it reads as well as the NRSV - sometimes even better.

No argument from me on two matters in the West post, however. The NIV is rubbish, and the REB is an under-appreciated (even if a little dated) triumph of the translator's art.
Posted by Gavin R at 18:09

Email ThisBlogThis!Share to TwitterShare to FacebookShare to Pinterest
Labels: Bible