Denial, thy name is Missouri 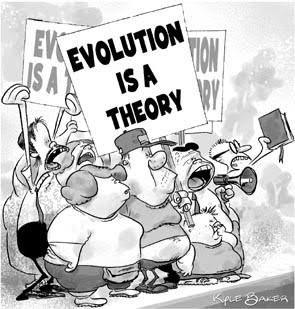 I keep trying to avoid negative comments about the Missouri Synod, but it's hard. Especially when leading figures within this multi-million member sect keep saying outrageously silly things.

I'm sure there are intelligent, thoughtful people in the Missouri Synod... somewhere. While most of those fitting that bill probably left way back in Seminex days, there has surely been time enough for a marginal increase in IQ levels across the synod since.

Here we are in the twenty-first century, and a church executive who can also presumably manage to tie his own shoelaces, seriously suggests Adam and Eve were real, historical individuals.

Now I know the LCMS was, along with the Seventh-day Adventists, one of the original big promoters of Young Earth Creationism, but even so you'd think at least one of the bigtime synodical shakers and movers would occasionally pick up a copy of Scientific American.

Or, all else failing, an issue of National Geographic.

Apparently not, unless it's to tut-tut over the evils of evolution.

Here's what I'm talking about:

Where does any scientific evidence fit into this bit of logic? It doesn't. A literalist reading of Genesis trumps anything the modern world can throw at it. Adam and Eve were historical because... this guy can't think of another way to endorse marriage???

The writer goes on to quote an obscure British fundamentalist to "prove" his point.

The historical reality of Adam is an essential means of preserving a Christian account of sin and evil, a Christian understanding of God, and the rationale for the incarnation, cross and resurrection. His physical fatherhood of all humankind preserves God’s justice in condemning us in Adam (and, by inference, God’s justice in redeeming us in Christ) as well as safeguarding the logic of the incarnation. Neither belief can be reinterpreted without the most severe consequences.

In other words, if my dogma runs aground on contrary evidence, the facts are wrong. Above all else "safeguarding the logic of the [author's understanding of the] incarnation" and letting God slip out of responsibility for "condemning us" is paramount.

You can imagine these guys baying for Galileo's blood. A heliocentric cosmology at the cost of "severe consequences" to our tidy doctrines? No contest! String the heretic up!

This is medieval thinking. Medieval logic. The Enlightenment has yet to break across the fusty "confessionalism" of this dinosaur synod.

Which is why it keeps publishing Alfred Rehwinkel's laughable 1950s creation science text, The Flood.

And why in recent times it has published and promoted the specious YEC drivel mentioned here, here, here and here.

Coincidentally, the current issue of New Scientist has a cover feature on denial.

Denial... is the automatic gainsaying of a claim regardless of the evidence for it - sometimes even in the teeth of evidence. Denialism is typically driven by ideology or religious belief, where the commitment to be belief takes precedence over the evidence. Belief comes first, reasons for belief follow, and those reasons are winnowed to ensure that the belief survives intact. (p.36)

What New Scientist calls denialism could just as aptly be called idolatry.
Posted by Gavin R at 17:03