This was a deep and many-faceted question when I first embarked on theological studies at Otago. One of the first papers I took was "Doing Theology." The textbook for the course was Alister McGrath's comprehensive Christian Theology: An Introduction. It was in this 100-level paper that I was first introduced to such luminous figures as Colin Gunton. It was, in some ways, a "baptism of fire," and to this day a mere mention of Gunton's name produces an involuntary shudder from somewhere down in my lower brain stem.

It seems I needn't have bothered with all that work, because Terry Sanderson, president of something called "the National Secular Society", has sussed the question in a single column in The Guardian: Theology: Truly a Naked Emperor. Theology, proclaims Sanderson, is drivel.

He has also uncovered a slightly longer definition by sci-fi writer Robert Heinlein: "Theology ... is searching in a dark cellar at midnight for a black cat that isn't there. Theologians can persuade themselves of anything."

Obviously McGrath needs to come down from Oxford and give Sanderson a good talking to!

Then there's the reference to Rowan Williams who "is said to have a brain the size of Jupiter because he can produce convoluted writing that nobody with their feet in reality can comprehend."

But wait, there's more! Here's a one-liner attributed to H. L. Mencken: "For centuries, theologians have been explaining the unknowable in terms of the-not-worth-knowing."

Sanderson is just lucky that it's not normal C of E practice to issue fatwahs.

Another Sanderson attempt at answering that question: "Theology is an excuse for grown men to spend their lives trying to convince themselves, and others, that ridiculous fairy tales are true."

I know some former co-religionists and bearers of the purple hymnal who would now gladly raise holy hands in choruses of 'amen' at that statement. Who knows, maybe he's got a point, but I can assure you that neither the Mencken nor Heinlein quotes appeared anywhere in the 420 page "Doing Theology" study guide! Perhaps it's also worth pointing out to Terry that there are not a few "grown women" involved in the theological enterprise these days. 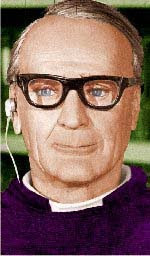 But the thing that particularly caught my attention in the Guardian column was a link to a very old routine by comedian Stanley Unwin, blessedly preserved on YouTube. Unwin achieved fame by developing his own nonsense language which he called 'Unwinese,' a form of glossolalia for the stand-up circuit. The implication being that theological language, like Unwinese, makes no sense whatsoever.

Interestingly, Unwin donned a Roman collar to star in the Gerry and Sylvia Anderson children's series The Secret Service as a priest (it was never quite clear whether he was supposed to be Catholic or Anglican.) This was the last - and least successful - of the Anderson's puppet productions which previously included Thunderbirds.

At times Unwin appeared "in the flesh," but mostly did a voice-over for a puppet character endowed with his features.

Needless to say, "Father" Unwin's acting was a bit wooden.

On balance I'll confess a preference for Anderson over Sanderson. As for Unwin and Gunton, it's surely got to be the comedian who is the more lucid of those two.
Posted by Gavin R at 22:48