Two new books to look out for

Scripting Jesus: The Gospels in Rewrite. L. Michael White was impressive in his earlier work, From Jesus to Christianity, but this promises to be even better.

"In Scripting Jesus, famed scholar of early Christianity L. Michael White challenges us to read the gospels as they were originally intended—as performed stories of faith rather than factual histories. White demonstrates that each of the four gospel writers had a specific audience in mind and a specific theological agenda to push, and consequently wrote and rewrote their lives of Jesus accordingly—in effect, scripting Jesus to get a particular point across and to achieve the desired audience reaction.

"The gospel stories have shaped the beliefs of almost two and a half billion Christians. But the gospel writers were not reporters—rather, they were dramatists, and the stories they told publicly about Jesus were edited and reedited for the greatest effect. Understanding how these first-century Christians wanted to present Jesus offers us a way to make sense of the sometimes conflicting stories in the gospels.

"One gospel's version of events will be at odds with another. For instance, in Jesus's birth narrative, there is no mention of a stable in Matthew or Luke, but then there are no wise men in Luke and no shepherds in Matthew. Jesus has brothers in some gospel accounts, and sisters in others, and their naming is inconsistent. Depending on which gospel you are reading, the disciples shift from bumbling morons to heroes of faith. Miracles alter or disappear altogether, and whole scenes get moved around. Such changes from one gospel to the next reveal the shaping and reshaping of the basic story in the living world of the first followers of Jesus."

Then there's The Making of Paul: Constructions of the Apostle in Early Christianity. Richard Pervo is a significant figure in the study of Acts, and an independent thinker when it comes to challenging received wisdom. 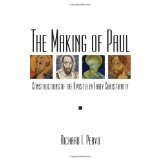 "The influence of the apostle Paul in early Christianity goes far beyond the reach of the seven genuine letters he wrote to early assemblies. Paul was revered —and fiercely opposed— in an even larger number of letters penned in his name, and in narratives told about him and against him, that were included in our New Testament and, far more often, treasured and circulated outside it. Richard Pervo provides an illuminating and comprehensive survey of the legacy of Paul and the various ways he was remembered, honored, and vilified in the early churches. Numerous charts and maps introduce the student to the "family" of Pauline and anti-Pauline Christianities."

Sadly, you probably won't find them featured on the shelves of your local Christian bookstore, where you're more likely to find the latest sickly grunge from some big-name, tithe-farming television evangelist. Happily, both are available on Amazon.
Posted by Gavin R at 14:57