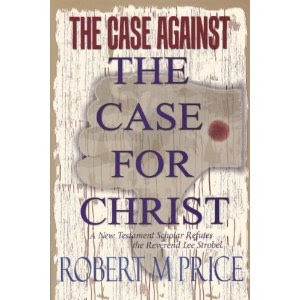 I've said it before, I'm a huge fan of Robert Price.

The tragedy is that Bob, a former Baptist minister who still sings in the choir at an Episcopal church, has to publish his books through imprints like the American Atheist Press, rather than mainstream publishers. This means his readership is usually heavily weighted toward confirmed skeptics, whereas the folk who should be cracking open the covers are unaware that they even exist.

That's especially so with his new title, the Lee Strobel-busting The Case Against the Case for Christ.

Lee Strobel arguably is now the leading apologist in America for evangelical, fundamentalist, benighted forms of Christianity. Although not an authority himself in any of the fields in which he defends his faith, he has produced a series of best-selling The Case For... books in which he consults alleged experts to obtain 'evidence' and problematic information with which to prop up dubious beliefs he has adopted. He does not appear to have done any competent investigation on his own or consulted any genuine authorities on the relevant subjects. It is fair to say that all of Strobel's books are long exercises in applying the fallacy of informal logic known as 'The appeal to authority.' Originally published in 1998, The Case For Christ has now bamboozled and hornswoggled the better part of a generation of Americans. Something needed to be done!... Because Strobel has drawn upon the best-known and prolific apologists alive today and brought their arguments together for easy reading, Dr. Price has seized the opportunity to wipe out the entire field of Christian apologetics in the course of refuting Lee Strobel. With punning as well as penetrating humor, Price has created a book that can be used as a handbook by anyone troubled by the claims and importuning of Christian apologists.