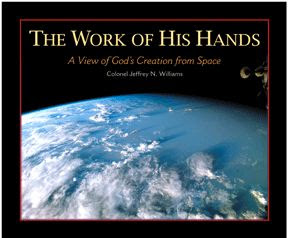 Jeffrey Williams has done time as an astronaut, flying on the space shuttle and spending six long months on the International Space Station with a Russian cosmonaut for company, with whom he attempted to discuss theology. He's apparently also a talented photographer, and what an opportunity that would be for someone perched in orbit.

Williams is also a member of the fundamentalist Missouri Synod, and has just published a book of photographs taken "on the job" through the Synod's publishing arm, Concordia, called The Work of His Hands. At the launch in St Louis "Williams screened a video from his most recent mission on the Space Station for about 300 employees of Concordia Publishing House. Afterward, about 250 of them crammed into the publisher's bookstore to have Williams sign a copy of his book.

"Lisa Goodsell, 42, from Waterloo, Mo., and Diana Szolga, 50, from Fairview Heights, waited in line to talk to Williams as a man dressed in a space suit handed out "astronaut ice cream" to kids in the store and told them the creation story from the biblical book of Genesis."

Astronaut ice cream and creation myths delivered by an actor in a space suit? Whoever said those Missouri Lutherans couldn't do things in style!

"His book documents the peace in one astronaut's mind between the often dueling fields of faith and science. "Good science and the Bible are consistent," Williams said. "I don't see any conflict there." '

It would be interesting to know what Williams thinks "good science" is. The Missouri Synod is a notorious proponent of old fashioned Young Earth Creationism.

According to Williams, "True, life-transforming faith in God and relationship with Him is based [on] God's Son, the Lord Jesus Christ, in His work on the cross as revealed in the supernatural revelation of the Bible."

It would also be interesting to know what Williams thinks "the supernatural revelation of the Bible" is.

Maybe the answers are in his book, but despite the showcasing of some stunning images, somehow I don't think I'll be adding it to my wish list on Amazon.