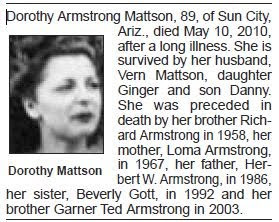 This notice appears in the latest issue of The Journal: News of the Churches of God.

Dorothy Mattson, nee Armstrong, was an unintentionally significant figure in the story of her father's sect, the Worldwide Church of God (previously the Radio Church of God),though she kept a low profile over many years. Mrs Mattson kept a dignified silence about moral allegations against her father, a self-proclaimed "End Time Apostle", that surfaced very publicly in David Robinson's 1981 book Herbert Armstrong's Tangled Web, and were later widely repeated in many media.

As far as I am aware, none of Herbert Armstrong's descendents are today associated with the church he established (recently rebranded as Grace Communion International) although one grandson, Mark, leads a minor splinter ministry that relies heavily on the reputation and resources produced by his father, the late Garner Ted Armstrong, Herbert's estranged son.

Front and back pages of The Journal are available as a PDF download.
Posted by Gavin R at 20:41