A pain in the ark 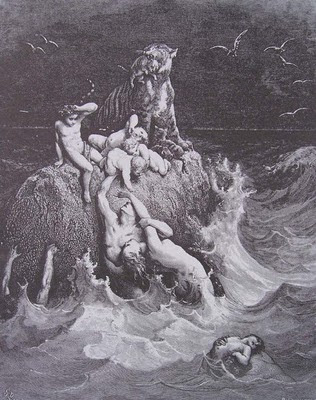 It's a title that I'd have loved to come up with first, but British journo Adam Rutherford got there first. Writing in The Guardian he also coins a term I've never heard before, but may be tempted to adopt, "duff theology."

"Christian fundamentalists are of course silly people. This primarily 20th-century phenomenon uses James Ussher's silly biblical generation calculation to assert duff theology and literal truth to Genesis, which while quite elegant in its prose, is also quite silly. The story of Noah is not just silly but hateful, and impossible... I just don't understand why anyone would want to hunt for physical proof of a story that revealed your God to be a bit of a genocidal arsehole."

Oh come now Mr Rutherford, aren't you overstating the hateful and genocidal bit. Haven't you seen those cute kiddie illustrations of the animals placidly going in two-by-two? Just look at this delightful illustration from the Gustave Doré Bible. Anything hateful or genocidal here?