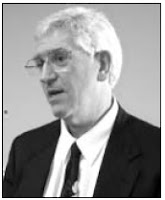 I've never met Dennis Diehl in person, but I've got to know him as well as you can know anyone via the Internet. On a previous website I published some excellent articles by Den. He's far too honest and reflective a guy to have remained a fundamentalist minister.

Recently Dennis debated former WCG ministerial training honcho and AICF executive Art Mokarow in Tyler. The subject: Is the Bible the inspired word of God? What Den didn't realise when he accepted the invitation was that he'd end up facing a tag team: Art and "Oxford" educated academic Ron Moseley.

I've just read the transcript, and Den did a great job on behalf of all of us who have left fundamentalism behind. Reg Killingley was a fair and skilful moderator, Mokarow was thoroughly pleasant and polite (though it was hard to find much of an argument in his statements), while Moseley came across - and this is of course just my impression - as a total blowhard.

Art Mokarow introduced Moseley thus: "I met this gentleman three years ago at the Dallas gathering of scholars. We had 25 scholars come. We were in Dallas for five days. They were from a variety of denominations, and many from Worldwide and splits. I met this gentleman [Dr. Moseley]. I found out he had a doctorate from Oxford."

Well, actually not. In 2008 I wrote the following very brief comment on Ambassador Watch after Moseley was featured in Dixon Cartwright's publication The Journal.

A seemingly scholarly article by Ron Moseley, a graduate from Oxford Graduate School and a Fellow and Scholar of the Oxford Society of Scholars. Sounds impressive, but considering the blatantly apologetic quality of the writing I googled the guy and found that Oxford Graduate School isn't associated with Oxford University but is located in Dayton, Tennessee. Moseley now runs his own school which is, according to its website "accredited and in good standing with a religious accreditation commsion [sic]".

I thought it was a fairly tame comment. A blistering response was however received from the man himself. This is a cut down version.

Concerning the article posted by Gavin, whoever that is, I will gladly clear the record. Yes, I studied five separate years at Oxford University in Oxford, England, and have read numerous papers at Kellogg College, and Magdalen College, which are major parts of Oxford University. I lived in the dorm at Rewley Center at Kellogg College. I have also studied twelve years during the summers at the Hebrew and Jerusalem Universities in Jerusalem (that is in Israel) not Tennessee. Yes, I did graduate from Oxford Graduate School, which is in Tennessee, which is a fully regionally accredited graduate schoo. It is not associated directly with Oxford University nor has it claimed to be. However, if one graduates from Oxford in Tennessee, it is required they earn a minimum of one semester in Oxford University in Oxford, England, as a part of their education. Oxford Graduate School in Tennessee has at least two professors, one in law and one in philosophy, which are also instructors for Oxford University in England and live there and travel to Tennessee due to the close association of the schools although not academically. I have also studied at the University of Texas in Austin, as well as several other fully regionally accredited colleges including Princeton Theological Seminary, which is a part of Princeton University in Princeton, New Jersey. I might add, of all the schools named both in the U.S., Israel, and Europe, by far the best school was Oxford Graduate School in Tennessee... I resent any insinuation of a second class school due to it being located in Tennessee or its quality. While in Oxford University one of my courses in Literature was on Frankinstein, there were no such cases of inferior curriculum in Tennessee... Tell Gavin commission is spelled "commission" not commison (sic). Go figure... It case you didn't get the message, yes, it pissed me off!

Charming fellow! How could one not respond in a spirit of Christian humility!

Ron, thanks for the info. Unfortunately you posted under the wrong thread.

I fully and unreservedly accept your scholarly claims, but would respectfully make the following observations.

1. Paragraphs are useful in breaking up a body of text, even in Brill publications.

4. The word "commsion" appears in that form on your Institute's website. I just cut and pasted it, adding the (sic) in order to show that the error originated elsewhere.

5. Does your Institute offer anger management courses? The response you offer is way out of proportion to the comments offered on the blog.

Fully accepting your fine credentials, which are of a far higher order than any I possess, I am still struck by the less than scholarly tone you adopt.

Yes, I know, I shouldn't have, but the Devil made me do it. Note however that Moseley made no claim to degrees from Oxford (UK) or Princeton, or Hebrew University for that matter. In fact Dr. Moseley supplied the following information to The Journal.

He studied in America, Jerusalem and England. He has a Ph.D. in Second Temple history from Louisiana Baptist University and a D.Phil. and D.Litt. from Oxford Graduate School, Dayton, Tenn. He studied during five separate years at Oxford University in England and studied parts of 12 years at Hebrew University and Jerusalem University. He has also studied at Princeton University.

Putting aside the minor matter that, Dr. Moseley's claims notwithstanding, Princeton Seminary is a separate entity to Princeton University, how exactly do you explain the listing over at St. Elias' faculty page?

Beats me. They read differently again (and presumably with greater accuracy) here. I looked up Luther Rice and the wonderfully generic-sounding International Seminary, but to use Dr. Moseley's own delightful expression, they seemed pretty "rinky-dink."

In any case, reading the transcript of the debate I was struck by Dr. Moseley's colorful turn of phrase.

[I]n the New Testament, all these cats who were with Jesus died or had gone off to India.

It’s like when one of these old boys gets a tattoo of an ant on his shoulder and by the time he’s 60 years old it looks like an eagle drug down to his knees. Can I get a witness?

Paul was so prominent and not one of the 12 apostles because Jesus said to the 12 apostles go only into the Jews and nobody else because you guys got real problems with circumcision and even touching, eating, with these other cats.

But Paul had a non-Jewish dad.

The word rib means cell. I’m not saying He cloned Eve, but the word dust [in Genesis 2:7] goes back to the root of a-tom, not Adam but a-tom, like atom.

The transcript is due to appear in the May 31 issue of The Journal. Beg, steal or borrow a copy. Well, maybe not steal... It's a clash of world-views ranging - again, just my opinion - from perceptive, through slightly confused, to ludicrous (Den, IMHO, provides the perceptive part.)

Can I get a witness?


Photo of Dennis Diehl: Dixon Cartwright, The Journal: News of the Churches of God