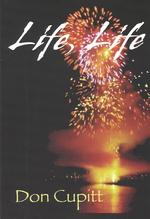 I've been reading Don Cupitt's Life, Life, and frankly I don't know what to make of either it or him. Cupitt is very much a cutting-edge theologian-philosopher, but unlike most others with that kind of claim, he's quite readable. Moreover he has the cheek to say things directly that others would equivocate on.

Atheism is perfectly correct in that indeed there is not an actual being out there to be named or referred to as God. (111)

You see what I mean... How about this:

In the past, people often thought of morality as bringing a particular individual life under general rules. Morality didn't at all help you to become your own unique self. Its concern was always to subordinate the particular to the universal. Rule-based morality is therefore dead, because it does not help one to become an individual. ... I am under a sacred obligation to find and follow the personal lifestyle through which, as I live it out, I can become a unique, individual, fully-expressed self. It is in that way, and not by confining myself to some set of rules, that I can make my best contribution to the human scene as a whole. (45-46)

With which I at least partly agree. In fact, there's no doubt that this Anglican priest who doesn't believe in God has some valuable and incredibly perceptive things to say. The quotes don't begin to do justice to his overall argument about life, language and existence. Here's one that gets close.

Simply out of chatter we generated language, established values, built up our huge and elaborate knowledge systems and - strangest of all - we even generated our own consciousness, our own subjective life.

The bubble is unmoored, outsideless: as seen from inside it, there is no way out. (91)

But there are nagging doubts. Cupitt is an old codger, and speaks with the plummy voice of an Oxford don - which is appropriate given that's what he is. But to be honest, being myself an only partly reformed Pietist at heart, the exaltation of rampant sexuality as an expression of "the new model" grates.

I like the new-model idea of the unity of religion and the sex drive: that is, I like the way libido flowing through us gives colour to the world, makes it dazzlingly beautiful, and turns into religious joy. That's redemption, new style. (129)

Free-range bonking in the guise of Lebensgefühl seems in Cupitt's universe to be an indicator on the path ahead. Yeah, sure, we should all be comfortable with our own bodies, but Cupitt goes a tad beyond that.

But with reservations, it's an interesting if somewhat cerebral read. One final brief quote: