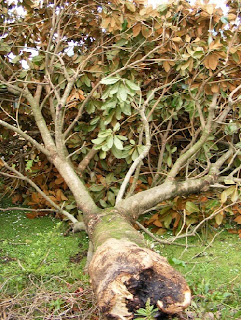 The old magnolia tree blew down last night as gale force winds struck my little town. It has been there from well before the house was built, an imposing presence on an unassuming section. This morning it lies prostrate, broken off at the roots, and just missing the corner of the house. How are the mighty fallen.

I slept through it. An early night in the hope of catching up on badly needed sleep meant I missed the power cut too. My neighbours weren't as relaxed at the time, they felt their house shake and rattle as they groped for the candles, and in the light of day it's clear their beautifully tended front garden will require a lot of work to bring it back to where it was. Another neighbour who dropped by to have a look at the tree observed sagely that the old magnolia was top heavy. He's probably right.

It's a metaphor for life I suppose. By this time next week it'll be gone, history. Who'd have thought it. A lesson in the impermanence of all things, but especially those things we just take for granted.

Now if I was a preacher-type, there'd be the makings of a sermon there. I think we should all be grateful that I'm not...
Posted by Gavin R at 14:15