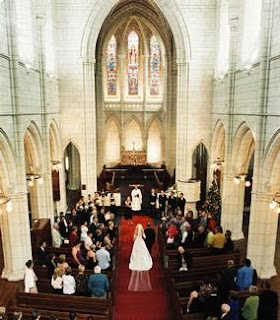 St Matthew in the City is a truly beautiful Anglican church in the heart of Auckland. I've attended a couple of events there with visiting speakers. It has a reputation - and a well deserved one - as a bastion of progressive Christianity. There are few such oases left as mainstream churches lurch into senility.

Tonight St Matthew in the City featured on nationwide television as a backdrop to TV3's New Zealand's Top Model. The seven remaining gals paraded from the sanctuary down an improvised catwalk in their frilly knickers. I can only say that it didn't happen when Bishop Spong was in town.

Funnily enough, several of the models were hesitant to "do it" in an allegedly sacred space. You have to say it was incongruous at the very least to see attractive young women hawking lingerie and strutting their stuff against a background of crucifix and stained glass. You also have to wonder what the church apparatchiks were thinking when they hired out the facility to the gods of fashion and narcissism.

OK, it made interesting television, and yes, it certainly wasn't hard to watch. It's not a matter of prudishness, but appropriateness. It wasn't appropriate if your concept of 'church' includes worship, dedication to a higher cause and a sense of having a space set-apart for that purpose. Commercial bimbo culture is surely the antithesis of that. Could you imagine this happening in a Catholic church, or down the road at the Baptist Tabernacle? Don't think so.

No surprise then that the next advertised event is "the blessing of the animals" on October 3. Spoilt pooches piddling on the carpet?