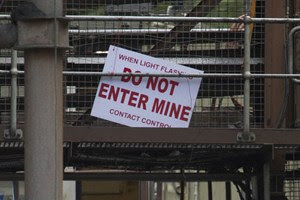 The Pike River Mine disaster continues to dominate news in New Zealand as the outlook for the twenty-nine miners becomes grimmer by the hour. Among those caught below ground is seventeen year old Joseph Dunbar who was proudly beginning his first day at work. He was due to start on Monday, but leapt at the chance to begin early, last Friday, the day of the blast. This tragedy has struck hard in the small, tight-knit communities of the South Island's West Coast.

What has been striking from the beginning has been the constant repitition of the mantra about "the thoughts and prayers" of so many for the miners and their families. Caught in the limbo of unknowing - the frustrating lack of information about whether any or all of the men are alive or dead - it seems to be one of the few things that can be said. What is remarkable is that this expression comes so freely from the lips of individuals who are famously agnostic and non-religious. What they mean by 'prayers' seems to be 'deep concern,' 'empathy.' Even as I type this a prominent television journalist has just repeated the phrase in concluding an interview. Is Mark Sainsbury really the praying type? Is Prime Minister John Key?

Driving in on the morning commute, I listened to a radio interview with the local Anglican Archdeacon at Holy Trinity church in Greymouth. He opined that it would take a miracle - supernatural intervention - for the miners to be rescued, something he nevertheless was sure was entirely possible. He then swiftly covered his tracks by saying that God was not, of course, obliged to do any such thing.

I don't want to sound critical. The situation remains painfully unresolved and uncertain as people cling to hope, and local churches have deployed to provide much needed support for the community. The Salvation Army is, as always, a very present help in times of need. But I do wonder whether times like these are appropriate for "men of the cloth" to indulge in pious platitudes and dodgy attempts at theodicy. Miners, to quote the Archdeacon again, are practical people, not inclined to place spirituality at the "top of the pops." In the end it's about dedicated rescue teams, international cooperation and human judgment informed by technology and experience. The rest of us are powerless observers; deep concern and empathy are our only possible contribution, but that's not quite the same thing as entreaties and petitions to a seemingly fickle higher power.

What's God got to do with it? Where do supernaturalism and miracles fit? Is talk of such things a comfort or an obscenity?
Posted by Gavin R at 19:41