From Tech to Toaster


I hate it when the Internet goes down. Specifically, when the ISP, in this case the usually dependable Slingshot, has a hernia and service drops 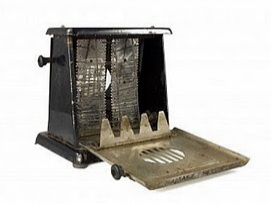 out for what seems hours on end. Not that it happens often, it doesn't. But on those rare occasions when it does, boy do you know it!

Tonight was such a night. Not only did Firefox spit at me, the Kindle conked and my smart phone morphed from android to toaster.

Isn't it amazing just how dependant we've become on the technology. I can't imagine living without globe-girdling communication, and it's a creature of but yesterday.

There's the stuff that was already here when you were born, which we find completely normal and take for granted - toasters, telephones, cake mixers, TV and radios.

There's the technology that comes on the scene during your lifetime, but before you turn thirty. This is regarded as the cool stuff: video tapes, desktop computers, FM radio (you'll need to adapt the list to suit your own age group).

Anything after the brain cells atrophy at thirty is completely pointless and probably threatening. I mean, do we need to text shopping lists, and won't it stunt teenagers' brains and destroy their ability to spell and use punctuation? Think back to your parents' puzzlement at the innovations you loved.

And don't you just hate it when technology that still blows your mind is simply blasé to the kids?

I'm reminded of a conversation with a colleague a week or so back. She hit thirty some thirty years ago, and was complaining about being unable to pick up Maori Television for the free-to-air coverage of Rugby World Cup pool games. When I sensitively and solicitously suggested that she was almost definitely the last New Zealander standing who hadn't migrated from analogue across to either Sky or Freeview the dear lady was unimpressed, suggesting I had a fixation on 'boys toys'. Well, quite possibly... but what's her point?

As for tonight's outage outrage, Slingshot has picked up its pebbles and is back in action. Phew!
Posted by Gavin R at 00:49