Of Crucibles and Landfalls

November has seen an overindugence in classic Science Fiction on my part. I blame the Kindle. Who could resist, for example, revisiting MZB's Darkover for the first time in twenty years, now delivered in a crisp liquid ink format? 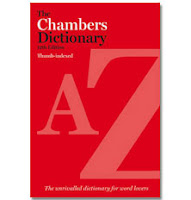 Not included, as it's a reference book, is the newly released Chambers Dictionary. The 12th edition was launched this year, and its a brilliant contrast to the often stodgy offerings from Collins and Oxford that dominate the market in Her Majesty's Dominions. This is the dictionary for word lovers and word game afficionados. Philip Pullman and Melvyn Bragg both recommend it - what more could one say?
Posted by Gavin R at 17:17