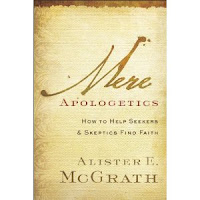 Apologetics is another name for self delusion. What can be sadder than to see an otherwise intelligent adult 'cooking the books' to suit their comfort zone? But what do we make of Alister McGrath's upcoming effort, to be released at the end of this month?

McGrath is no intellectual slouch. He has an impressive CV and a string of well-regarded publications to his name. And yet, here he comes, skipping down the apologetics aisle with an about-to-be-released book entitled Mere Apologetics (punning on C. S. Lewis' Mere Christianity).

C. S. Lewis may have been a tad strange, but he was, at least by all reports, a decent and compassionate kind of bloke. This is not true of too many other apologists, whether ancient or modern. The publicity blurb mentions other "great and articulate defenders of the faith" throughout history, from Augustine and Aquinas to Jonathan Edwards, G. K. Chesterton, Francis Schaeffer... Talk about a rogue's gallery! Who in their right mind would count someone like Schaeffer among the 'great'? Certainly not his son who has lucidly portrayed his father's feet of clay, mired as they were in a near-fundamentalist form of bog-Calvinism, despite pretensions to the contrary. Augustine? Anyone who has read James O'Donnell's biography of the bishop of Hippo will likewise realise what a thoroughly toxic dead end his legacy has been down the centuries - craven hagiographies not withstanding.

Nor is the publicity made any more convincing when it carries an endorsement by Paul Copan, whose weak (and arguably misleading) attempts to rescue Yahweh from charges of genocide have been so thoroughly savaged by Thom Stark.

But back to the blurb. Mere Apologetics "seeks to equip readers to engage gracefully and intelligently with the challenges facing the faith today while drawing appropriately [selectively?] on the wisdom of the past. Rather than supplying the fine detail of every apologetic issue in order to win arguments [because he can't?], Mere Apologetics teaches a method that appeals not only to the mind but also to the heart and the imagination [intellectual pablum?]. This highly accessible, easy-to-read book is perfect for [those who just want easy reassurance?] pastors, teachers, students, and lay people who want to speak clearly and lovingly [with no intellectual rigour?] to the issues that confront people of faith today."

So these are the folk in the target market. Speak unto us smooth things Alister, prophesy porkies...

And yet, this may all be highly uncharitable. McGrath does have a reputation for honest, credible writing, despite an on-the-sleeve evangelical slant. Whatever the identified demographic above seems to be, the subtitle boldly proclaims "How to Help Seekers and Skeptics find Faith."

Skeptics? Really? Well if McGrath can pull that rabbit from his hat, we should all be impressed. That'll be the acid test, determining whether this is just another crooning lullaby to keep the peasants dosed and dozing ("there, there, never you mind your silly little head about those nasty questions") or something more. Against my better judgment, I'll be giving McGrath's new book a go, though I'm not getting my hopes up.
Posted by Gavin R at 17:01