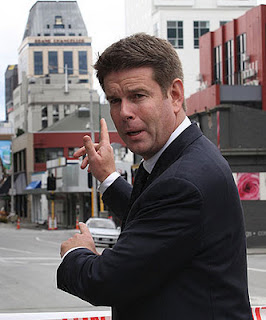 After reading a blog entry by James McGrath today, I had an almost irresistible impulse to apply an expression widely used in Her Majesty's Dominions that may be less familiar to those who speak alternate versions of English: it involves calling someone "a cheeky bugger."

The term is famously associated in New Zealand with TV3 journalist and presenter John Campbell. When John calls someone "a cheeky bugger" it's almost an expression of warm regard!

But there are always the sallow-faced, thin-lipped Puritans among us. I've served time in those salt mines where even the expression "golly" is regarded as a breach of the Big Ten. Why? It's a euphemism, and it's likely to send the careless speaker straight to the Very Hot Place. Equally dastardly are terms like "gee whizz" (or "gee willikers") and "jeepers."

How can anyone who has ever been ten years old reach such a stupid conclusion? Heaven knows what they'd make of the expression "flip!"

I'm of a generation which grew up without exposure to the "F word". It was simply too horrible to utter in the presence of women and children, but in the church-attending working class home I was raised in there was "buggering" aplenty. I was well into my teenage years before it even dawned on me that it had a less than salubrious, and far more colourful dictionary derivation. But wait, the etymology goes deeper. The offensive element is a vicious secondary derivation, reflecting a thoroughly vile bit of religious and ethnic bigotry directed against non-Catholic ('heretical') Bulgarians. What greater defamation could there be than to take their very name and identity, and abuse it by cruel association. Bugger!

These days kids are exposed to some really objectionable vocabulary, and that "F word" has been almost mainstreamed. The word we're discussing has seven definitions in the Collins English Dictionary, only two of which are capable of causing offence, while the 'F word' is clearly an expletive however you use it. Stand up comedy illustrates the trend, wallowing in cheap shock value at the expense of the genuine delights of word play and the pleasures of a more subtle manipulation of "the Queen's English." I'm not arguing therefore for wholesale capitulation to "bad language", but good grief (another wicked euphemism!) Charlie Brown, let's keep things in perspective.

What puzzles me is that the people who most object to euphemisms and informal exclamations seem to almost always be tone deaf to the "weightier matters of the law." You don't often find them passionately defending civil liberties, or standing in solidarity with those shafted by monied interests. They find little or no relationship between justification and justice, and see little corporate, community relevance to ethical behaviour. I'm among those, for example, who find slick, sports celebrity-endorsed television ads for loan sharks extremely offensive, or some Ten Commandment-quoting idiot who nevertheless feels free to speak "in the name of the Lord" - truly taking it in vain. A word simply means what we intend it to mean, rather than being bound to distant etymologies almost nobody thinks about. There are no sacred, canonical dictionaries - not even the Oxford - which can provide anything more than usage. Words morph down the generations, sometimes into the very opposite of what they originally meant, as anyone familiar with King James English should know.

So, to get back to where we started, is it okay to call someone a cheeky bugger on a biblioblog? Obviously there's no insult intended - and about the same percentage of vulgarity as you'd find of active ingredients in a quack homeopathic remedy. But should delicate sensibilities be considered? Maybe. So perhaps it might be best to simply say, in this case, that a cheekier bit of bloggery would be hard to find...
Posted by Gavin R at 19:30