Excuse me Ms. Mazar, are you nuts?

The March/April issue of the BAR includes (p.20) a half-page feature on the "seals of Jeremiah's captors," uncovered by Eilat Mazar.  So far so interesting.  But then...


... now visitors to Edmond, Oklahoma, can see them at their world premiere at the Armstrong Auditorium.

And there's a nice link to the auditorium website, courtesy of BAR.  The exhibit will, we're told, be on show through October 16.

Does Ms. Mazar, or the BAR, know anything about Armstrong Auditorium or Herbert W. Armstrong College?  Do they know about the separated families, their policy on medical intervention, that the college is unaccredited? 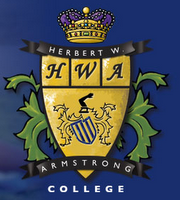 Do they know that both are controlled by the Philadelphia Church of God, led by Gerald Flurry, who claims to be "That Prophet" (John 1:21 KJV).  A man who writes: ""God's ministers must... lead God's people to magnify my office -- which is really God's office." (Royal Vision, July-Aug. 2000, p. 30).

Does Ms. Mazar know that Flurry, a British- Israelite, teaches that Anglos are the "true Israelites", not Jews.

Does she, or the BAR, know or care how Flurry's ministers operate?  Even down to telling their tithe-paying members how to make an approved cup of coffee?

Flurry must be delirious at the credibility he gains by being associated with Mazar (courtesy of the funding he throws her way), but does Ms. Mazar realise that this is a two-edged sword, and that bludging off Flurry makes her work look very shonky indeed?

Flurry knows we are judged by the company we keep. He gains respectability from the association, even if he has to shell out big bucks in the process.  Mazar loses, even though she gains cheap student labor.  Now the PCG gets to strut its stuff once again with the "world premiere" of these artifacts?  Incredible!

Giving comfort and lending credibility to high demand religious sects isn't a smart strategy for any scholar, regardless of the goodies on offer.

[A nod to the source - only to be known as Guinness O'Shandy - who kindly forwarded me a copy of this issue of BAR.  Cheers!]
Posted by Gavin R at 12:30