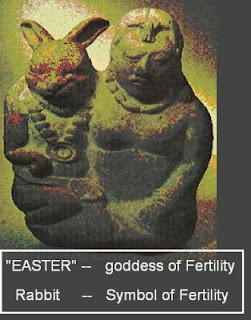 Well, allowing for a generous interpretation of 'pagan', of course it is.  But hello, that's the way any culture works, picking up interesting traditions and morphing them till their origins are lost and, frankly, irrelevant.  What matters is what we mean by them, not someone a thousand years ago.

Evangelical Christians take some persuading about this, particularly the wooden-headed fundamentalist brigade, and you have to suspect that there's a strong element of anti-Catholicism in the mix.  Regardless, doubts about the appropriateness of Easter continue to be a source of disquiet out on the fringe, and seem to be growing as the centre of gravity continues to tip away from the mainline churches.

Dr Tim McGrew disagrees though.  McGrew isn't a historian or a biblical scholar as far as I can tell from his CV, but one of those interesting breed of apologists that, having ceded the battle on other fronts, have specialized in epistemology.  Forgive me, but when I read of someone thus qualified being "a specialist in the historical accuracy of the New Testament" or an expert on miracles, sirens go off in my head.  That doesn't prevent Tim being a smart dude though, and he defends the traditional non-pagan understanding with some vigour in a short interview aired on Radio Rhema.  Convincing?  Not for a minute.

What interests me though is the backstory to the interview.  Apparently a lot of local fundamentalists are buying into the pagan origins thing and even maybe, reading between the lines, the Thursday crucifixion theory.  Shades of Herman Hoeh?