“We are not all Apostles, who were sent by a firm decree of God (certo Dei decreto) to us as infallible teachers (infallibiles doctores). Hence they cannot err, but we can, and we can be deceived in our faith, since we lack such a decree of God.”
Luther 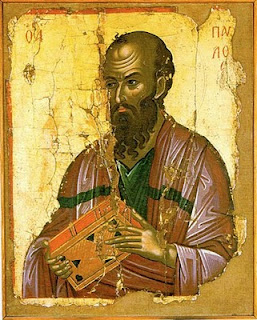 Think of Paul the apostle and what comes to mind?
It's a starry eyed approach, reinforced by the deep respect with which Paul's writings are read, whether in the lectionary cycle of mainline churches, or as proof texts hauled out to prove a preacher's point beyond any shadow of doubt.  Though most of us might never refer, as Luther did, to certo Dei decreto or infallibiles doctores, many of us begin with that very presumption.

But as anyone knows who has actually bothered to read Paul in context, he was at times - and one is tempted to say most times - a thoroughly egotistical and cantankerous old sod.  He is self obsessed, vain, sarcastic, irritable, uncharitable toward others, abusive and authoritarian.  He even falls out with his close colleagues, Barnabas is the obvious example along with John Mark, unless they are firmly submissive under his commandeering apostolic thumb.  He goes ballistic at the slightest hint of criticism.  We even suspect that he's not above inventing a few stories - or at least stretching the truth - in a good cause... his cause.  Few epistles demonstrate this more relentlessly than 2 Corinthians (chapters 10 -13).

Things are not going well in Corinth.  Along with some genuine concerns, which are quickly dealt with, the really big issue seems to be that locals have dared to criticise Paul and show some independent thought.  The apostle is clearly irritated and in no mood to take prisoners.  While claiming not to boast, Paul lets rip with a series of boasts to put his 'opponents' (who are actually fellow Christians) in their place.  You have to wonder what the Corinthians side of the story was, but of course we have no access to that.

Pastoral concern or just a massive hissy fit?  Whichever, the author of the love chapter didn't practice what he preached.  Of course Paul, like everyone else, was "only human."  But that's the very point where Luther throws out the anchor: certo Dei decreto and infallibiles doctores.


We can read Paul with the deepest respect, but it isn't possible to factor out his idiosyncrasies or his humanity.  Firm decrees and infallibility?  Not so likely.
Posted by Gavin R at 09:49