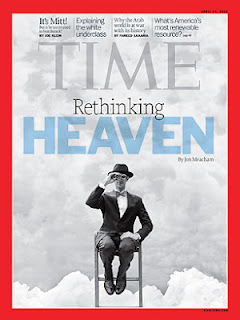 Easter, and TIME magazine trots out a seasonal story.  This year, good heavens, it's about heaven.

Or more specifically it's about the Wright Stuff, the crusade by Anglican bishop and academic N.T. Wright to re-conceptualise the Christian afterlife and bring heaven down to earth, a view "that's at odds with the pearly gates."

Many good things are said to flow from this 'new' understanding.  Christians can change their focus from 'pie in the sky by and by' to engagement with real-life issues today, anticipating a transformation that will fully come at the end of time.  The image shifts from harps and cherubs to resurrection, justice and transformation.  "The further believers have moved from the New Testament era," the article notes, "the further many Christians have moved from New Testament understandings about heaven."

It sounds good.  The traditional concept, expressed for centuries in art both great and gross, is a hard sell in the sophisticated twenty-first century, and the butt of more humour than any serious belief.

But I can think of Christian communities where resurrection eschatology has been long established - certainly long before any uppity bishop came along to lend it a veneer of respectability.  Various 19th and early 20th century sects, both in America and Britain, made it part of their stock in trade.  These non-conformist believers didn't expect to 'go to heaven,' but to rest in the grave until the resurrection, a time when the earth will be redeemed and every tear wiped away.  In response they were often labelled heretics, with much mumbling about 'soul sleep', but that sounds a lot like Wright's position.

But here's the bad news.  Few of these good folk cared a great deal about engaging with real-world issues.  Most scorned any kind of activism, content instead to await the coming magic millennium here below.  Feeding the hungry?  No.  These people were content to put notes in their wide-margin bibles and leave the hard yards (other than a spot of evangelising) to the Lord, content in the knowledge that they knew much more about the Bible's teaching than any bishop.  They've been, as much as the heavenly clouds and harps afficionados, no earthly use at all.

So, yes, it may be some progress to see the old paradigm take a nose dive.  It was incoherent and heading south anyway, with or without the help of Tom Wright.  But the not-so-new, not-so-Wrightian alternative won't mean much of a difference in itself, despite all the fine words and high hopes.  Changing our world for the better needs something more than swapping eschatological theories in the ecclesiastical engine room.
Posted by Gavin R at 23:42