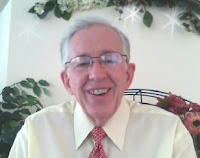 Art Ferdig is one of those names out of the past that I half remember.  His name appeared on the masthead of The Plain Truth in the Seventies, and he ascended to the inner circle as personal assistant to Herbert Armstrong.

So, whatever happened to dear ol' Art?  It seems he subsequently went off the deep end, as so many other former high-flyers in the Empire did, creating his own wacky religious enterprise.  Art, we are led to believe, has been taught by angels. 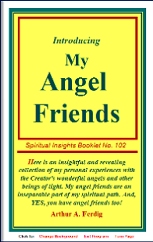 My name is Art Ferdig. Since autumn 2002, I've been taught by Angels and other wonderful beings of light, including the Christ Energy, Holy Spirit and more! It was an amazing wake-up call, and a privilege perhaps unparalled in modern times.

These divine beings put me on a profound spiritual path. I have been given much, and it is now my destiny to share their wondrous truths with all hearts ready to receive.

Lucky Art. Truly a blessed man.  His imaginary friends in the ether have even bestowed on the old boy the title "The  Bridge."  More likely, "the bridge to nowhere."

But Art has been getting his blessings in other ways too.  Using his faith networks, he promoted his company Tradex, an investment scheme which gambled on minute fluctuations in the currency markets.

And yes, whatever sublime angelic counsel Art might have been receiving from Metatron and his pals, it all ended in tears, lost investments, arrest and exposure.

Gary Leonard, who is consistently on top of most of the developments in the ruins of Armstrong's legacy, has recently posted on the Ferdig story, and there are a couple of articles in the media at wired.co.uk and patrickpretty.com.

It's all very sad really.  Any complaints can presumably be taken up with Metatron directly.
Posted by Gavin R at 11:27